Watch: Man Tries To Kiss King Cobra On Head, Gets Bit On The Lip

The video shows a man trying to kiss the snake when it suddenly bites him and the reptile slithers away. 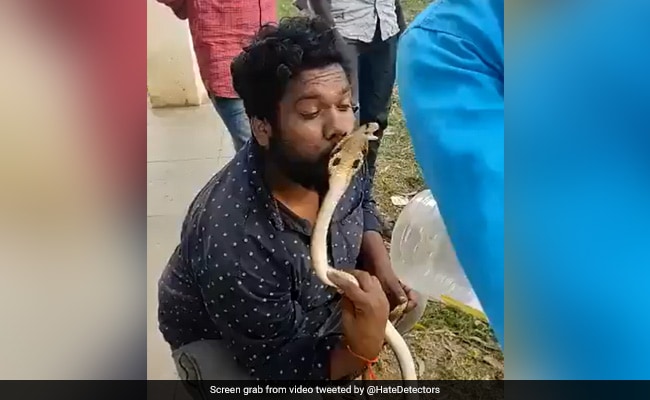 The man is a reptile rescuer

A video from Karnataka is going viral on the internet. The video shows a man trying to kiss a King cobra on the head after rescuing it. However, the snake was not feeling affectionate towards the man and turned its head back and bit him on the lip. The incident took place at Bommanakatte in Bhadravathi of the Shivamogga district.

The man is a reptile rescuer according to a report by Hindustan Times. The 30-second clip shows a man trying to kiss the snake when it suddenly bites him and the reptile slithers away. Moments later, other people are trying to catch the snake but it ran away.

In a horrifying video which has surfaced online, a man from #Karnataka's #Shivamogga was bitten by the #Cobra on the lip when he tried to kiss it. He survived the #SnakeBite.#ViralVideo#Snakepic.twitter.com/d3ge1A5Wx6

The man has survived the snake bite. The video has surfaced across the internet, while some social media users were upset with the man's actions, others started a meme fest. A user wrote, "Survived??? Really? But wonder what prompted him to attempt this in the first place. Can say he got what he asked for." Another user wrote, "I think this is the ever great lip-to-lip." The third user wrote, "This falls under the head.. “why women live longer than men.”

King Cobra, one of the most venomous, is also the longest among all such snakes. It is found in the rainforests of Southeast Asia. This variety of cobra has a maximum length of 5.85 metres.

The venom of the King Cobra is highly neurotoxic, and a human being can die within 15 minutes of being bitten. The snake is also known to bite several times in a single strike.

Close proximity or rapid movements can easily annoy the cobra. When King Cobra lifts its body, it may still move forward and attack from a considerable distance.