A video shared from the official account of Indo-Tibetan Border Police shows the soldiers performing suryanamaskaar, pranayama and meditation in rhythm and with great discipline ahead of World Yoga Day. 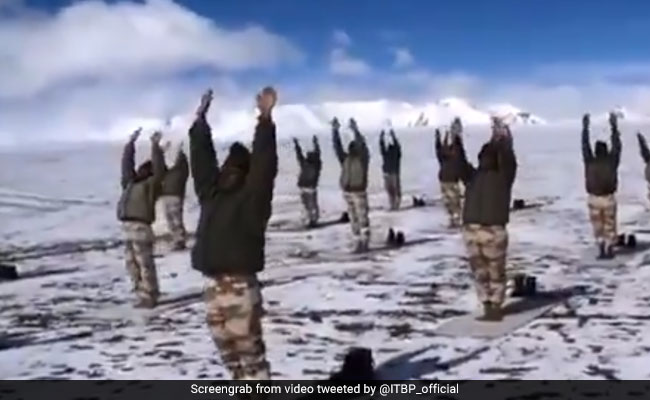 For Yoga Day preaparations, soldiers of ITBP performed yoga asanas at an altitude of 18,000 feet.

Amid snow-white mountain peaks and freezing temperatures of Ladakh, the soldiers of the Indo-Tibetan Border Police performed yoga asanas at an altitude of 18,000 feet as they brace up for the fifth International Yoga Day on June 21.

A video shared from the official account of Indo-Tibetan Border Police shows the "Himveers"  performing suryanamaskaar, pranayama and meditation in rhythm and with great discipline.

The Indo-Tibetan Border Police has been tweeting about the preparations for Yoga Day from various other high-altitude locations.

Meditation and Yoga practice at high altitude#Himveers of #ITBP gearing up for the #InternationalDayOfYoga2019#YogaDay2019#5thInterantionalDayofYoga#yogapic.twitter.com/i8Bvalxfhq

In countdown to Yoga Day 2019, Prime Minister Narendra Modi has also been tweeting an animated asana video every day since June 5. The videos demonstrate the asanas and talk about their benefits for body, mind and soul. He shared the video of "Pawanmukta" asana today.

Sharing a video on the many benefits of Pawanmuktasana. #YogaDay2019pic.twitter.com/Y4Ka8WWcl1

The theme for this year's Yoga Day is "Yoga for the heart".

The United Nations declared June 21 as the International Day of Yoga in 2014 after PM Modi called for the day to be adopted as a global celebration of yoga, an ancient practice that began in India more than 5,000 years ago.

This year, Jharkhand capital Ranchi will host the main event for International Yoga Day which will be attended by PM Modi. Other places where national programme for Yoga Day will be organised are Delhi, Shimla, Mysore and Ahmedabad.