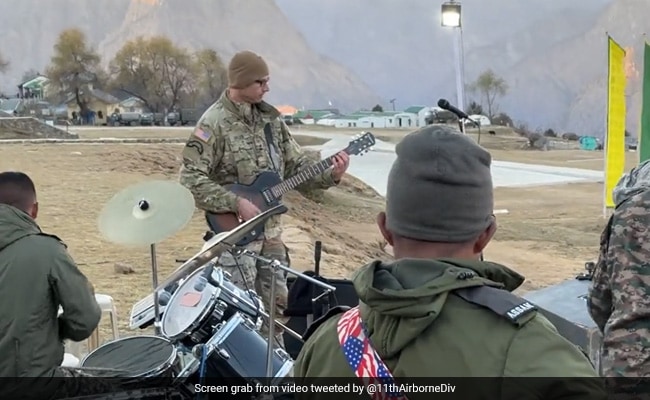 US and Indian soldiers play Nirvana's 'Smells Like Teen Spirit'

A few officers of the Indian and US armies recently held a spontaneous rock concert during the 18th edition of the joint military exercise “Yudh Abhyas” in Auli district of Uttarakhand.

A video from the rock concert was shared by the official Twitter handle of the 11th Airborne Division of the US Army. It shows army personnel of the two Quad countries jamming together to Nirvana's iconic song 'Smells Like Teen Spirit'. A US Army officer is seen playing the guitar while others are playing drums and joining in.

“Spontaneous rock concerts in the Himalayas with our Commanding General on lead guitar? All in a day's work for the Arctic Angels,” the US Army tweeted.

Spontaneous rock concerts in the Himalayas with our Commanding General on lead guitar? All in a day's work for the Arctic Angels. @USARPAC@USArmy@I_Corpspic.twitter.com/WQl9h40Z3f

“Great going...n tuning...proud to be wearing the Rhino badge,” wrote a user referring to the insignia of the Indian Army's Assam Regiment.

“New meaning to the phrase ‘Band of brothers',” a comment read.

New meaning to the phrase “Band of brothers.”

Many seemed impressed by the performance put together by the soldiers.

A user said, “Rock on in the altitude.”

Rock on in the altitude.

Many identified the popular song being played as  Nirvana's 'Smells Like Teen Spirit' from the superhit album 'Nevermind'.

Yudh Abhyas is an annual joint military exercise between the armies of the US and India. Its 18th edition was held from November 19 to December 3. The previous edition was conducted at Joint Base Elmendorf Richardson, Alaska, in October 2021.

In a statement, the Defence Ministry had said that the exercise would allow the armies of both the nation to share their wide experiences, skills, and enhance their techniques through information exchange.