Navy Day: During the rehearsal, an eye-catching performance by the Navy soldiers involved throwing guns with the bayonets on fire in the air 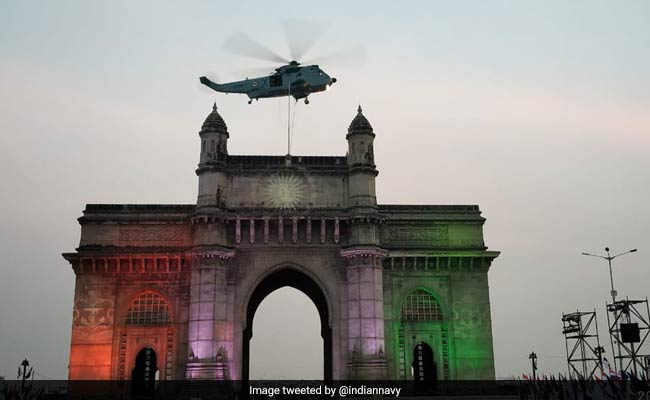 Navy Day rehearsal: A helicopter flies above the Gateway of India monument in Mumbai

The Navy put up an impressive show of skill amid a sea of colours at the Gateway of India in Mumbai, ahead of the Navy Day celebrations that falls on Tuesday. A Navy helicopter hovered slowly over the monument, lit in the colours of the national flag, while soldiers in white uniform marched below in a rehearsal of the Beating of the Retreat ceremony.

Hundreds of people turned up near the south Mumbai monument to see the rehearsal.

During the rehearsal on Sunday, an eye-catching performance by the Navy soldiers involved throwing guns with the bayonets on fire in the air, while a soldier walked calmly under it.

Navy Day is celebrated in honour of the maritime force's role during the war with Pakistan in 1971, when Indian warships attacked Karachi port and successfully hurt Pakistani operations in the western coast. The Navy fired several anti-ship missiles at Karachi port. The Navy's attack effectively blocked the Pakistani port from receiving potential supplies and put severe pressure on Pakistan.

#WATCH: Indian Navy rehearses for 'Beating the Retreat', as part of the Navy Day celebrations on December 4, at Gateway of India in Mumbai. (02.12.18) pic.twitter.com/8eFBTLXYnQ

The Navy Day also celebrates the role the Navy plays in securing the country's marine borders during peacetime and carrying out humanitarian missions. 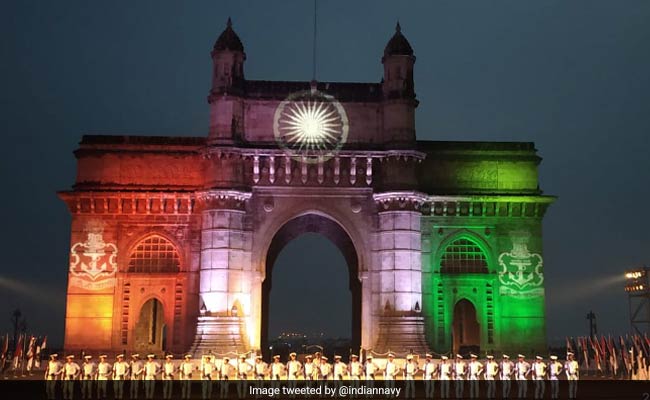 Navy Day: The Gateway of India monument is lit in the colours of the national flag

In the celebrations last year, the Navy's award-winning innovations were put on display at the Innovation Pavilion at the Navy House, New Delhi.