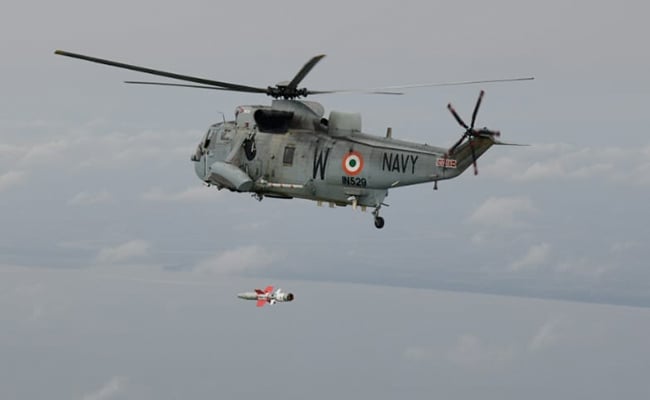 India today test-fired its first homemade air-launched anti-ship missile made by the Defence Research and Development Organisation, or DRDO.

In a footage released by the Indian Navy, a Seaking 42B helicopter loaded with the missile is seen flying over the sea test range in Balasore, off the Odisha coast, while another helicopter is seen following it for observation.

The anti-ship missile separates from the Seaking for a few metres before its motor fires up and it flies fast towards the target.

"It is the first indigenous air launched anti-ship missile system for Indian Navy," the DRDO said in a statement today.

"The missile followed the desired sea-skimming trajectory and reached the designated target with a high degree of accuracy, validating the control, guidance and mission algorithms. All the sub-systems performed satisfactorily," the defence research body said.

"The sensors deployed across the test range and near impact point tracked the missile trajectory and captured all the events," it said.

#IndianNavy in association with @DRDO_India successfully undertook maiden firing of the first indigenously developed Naval #AntiShip Missile from Seaking 42B helo, today #18May 22 at ITR, Balasore.#AatmaNirbharBharat#MaritimeSecurity@DefenceMinIndia@SpokespersonMoDpic.twitter.com/3AA0F3kIsS

The Navy tweeted the test-firing of the homemade anti-ship missile is a significant step towards achieving self-reliance in niche missile technology and reaffirms the Navy's commitment to indigenisation.

The missile used many new technologies including a homemade launcher for the helicopter.

Senior officers of the DRDO and the Indian Navy saw the test-firing. Defence Minister Rajnath Singh later congratulated the DRDO, the Navy and associated teams for the successful test-firing.