As a crowd of artists clad in traditional attire celebrated Govardhan Puja the day after Diwali, Chhattisgarh Chief Minister Bhupesh Baghel joined in on the festivities. 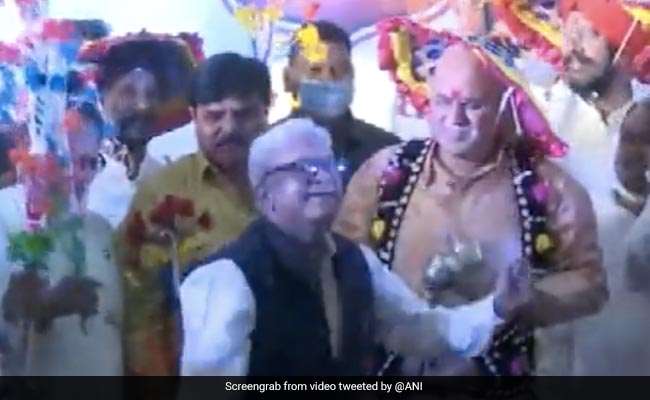 Chief Minister Bhupesh Baghel was seen dancing enthusiastically as onlookers cheered him on.

Chhattisgarh Chief Minister Bhupesh Baghel was seen dancing with artists at a 'Govardhan Puja' event in the state's capital city Raipur on Friday.

As a crowd of artists clad in traditional attire and conical hats played musical instruments and danced with colourful decorations and props in hand, Mr Baghel, aged 60, joined in on the festivities -- the Chief Minister was seen dancing enthusiastically to the music as onlookers cheered him on.

He later retreated into the crowd, clapping and giving space to a speaker to address the celebrating group.

#WATCH | Chhattisgarh CM Bhupesh Baghel was seen playing a musical instrument with artists at a 'Govardhan Puja' event in Raipur on November 5 pic.twitter.com/ij24dzQMj7

Earlier on Friday, Mr Baghel was "whipped" in a public ceremony in a village called Janjgiri, as part of Govardhan Puja festivities, during which a crowd watched and took videos.

The Chhattisgarh Chief Minister was seen holding out his right arm as a man gave him eight lashes. Mr Baghel later embraced his "attacker", as well as addressed the villagers in a speech, where he mentioned that he was carrying on a tradition that his father would annually do the honours for, one that was "meant for the good of farmers".

Govardhan Puja is a Hindu festival celebrated annually in many communities across India the day after Diwali.