Assam floods: The man, seen clinging to a gate submerged in water, called out to Chief Minister Himanta Biswa Sarma, who was on an inflatable boat. 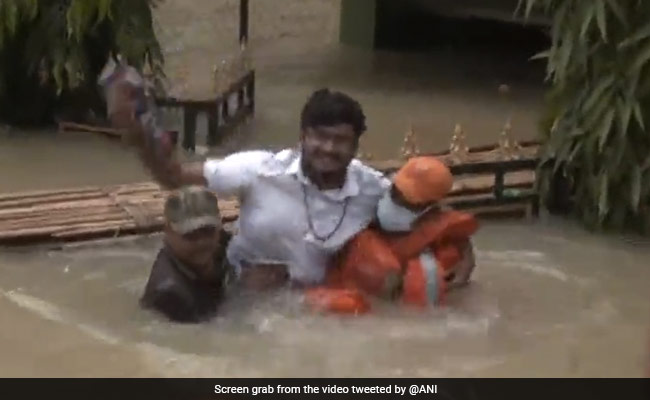 Assam flood: The Silchar resident was seen clinging to a gate submerged in water.

A resident of Assam's Silchar waded through waist-deep floodwaters today to greet Chief Minister Himanta Biswa Sarma when he visited the flooded town to take stock of the situation.

The man, seen clinging to a gate submerged in water, called out to Mr Sarma, who was on an inflatable boat.

Helped by emergency services personnel, he reached the Chief Minister's boat and handed him a "gamusa", an article of traditional Assamese clothing.

"I'll come sometime and have a cup of tea with you," the Chief Minister promised as he received the "gamusa."

"I will come to your home when I visit Silchar next," he replied to another resident.

So far, 121 people have died due to floods and landslides across Assam. As many as 25 lakh people still remain affected in 25 districts of the state.

In Silchar, where the situation still remains grim, drones are being used to deliver essentials in flood-affected areas.

Mr Sarma, during his Silchar visit today, said that his government's priority is to restore electricity. The situation will be much better in Silchar if there is no rain in the next 24 hours, he added.