Watch: Ahead Of Independence Day, Bhatsa Dam In Maharashtra Lights Up In National Flag's Colours

Bhatsa Dam was decorated with tricolour lights as part of the 'Har Ghar Tiranaga' campaign that was launched by PM Modi back in July. 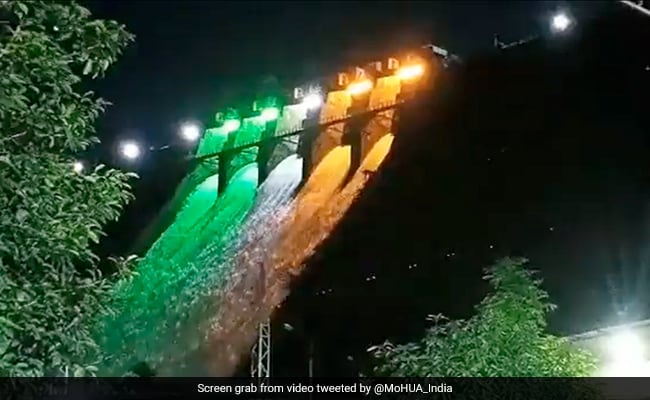 Ahead of Independence Day, the Bhatsa Dam, which supplies water to Mumbai and surrounding areas, has been lit up in the colours of the national flag.

According to the Ministry of Housing and Urban Affairs, the dam in Maharashtra's Thane was decorated with tricolour lights as part of the 'Har Ghar Tiranaga' campaign that was launched by Prime Minister Narendra Modi back in July.

"Our love for the Nation is unmatchable and it's beyond any boundaries," the ministry said while sharing visuals of the "magnificently illuminated" Bhatsa Dam.

Our love for the Nation is unmatchable and it's beyond any boundaries. On this #75YearsofIndependence, similar emotion was seen at Bhasta Dam of Thane, Maharashtra which was magnificently illuminated with the Tricolor contributing towards #HarGharTiranga initiative.#IndiaAt75pic.twitter.com/2Z9NFaJ765

Commenting on the short clip, one user wrote, "Awesome ! Great video and very touching." Another said, "Beautiful video and Har Ghar Tiranga - truly beautiful effort where the whole nation is united. In this backdrop swacch bharat should be our promise to ourselves and our gift for next generation."

Meanwhile, preparations to mark 75 years of Independent India are in full swing in the country. PM Modi launched the 'Har Ghar Tiranaga' campaign on July 22. The initiative aims to invoke the feeling of patriotism in the hearts of the people and celebrate Azadi Ka Amrit Mahotsav in the spirit of Jan Bhagidari (public participation). It also encourages people to hoist the tricolour at their homes from August 13 to August 15.

Recently, the Indo-Tibetan Border Police (ITBP) installed a 72-feet-high national flag at the ITBP Academy near Nag Mandir in Mussoorie. The Indian Coast Guard too had marked their participation in the campaign by unfurling the national flag underwater.