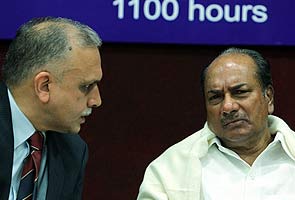 New Delhi: Defence Minister AK Antony today said India has sought details from the United Kingdom in connection with corruption allegations in the VVIP helicopter deal with Italy and "strong action" would be taken in case any foul play is detected in the procurement process.

"The contract is with a particular company based in the UK. We have also requested the Ministry of External Affairs (MEA) to take up the case with UK. We are making all efforts to find the truth in media reports," he said, when asked about the progress in the case.

The minister was interacting with reporters on the sidelines of an awards ceremony.

Mr Antony said the government was making "serious and sincere" efforts to find out the truth in the allegations levelled in the media.

"We have already written to the Italian government through the MEA about the media reports to get the details whether any middlemen are involved or any Indian entities are involved as this is not permitted in our laws," he said.

The minister said the Italian Ambassador to India has also been conveyed the "seriousness" with which New Delhi is taking the issue and has been asked to provide details at the earliest.

"If there is any iota of truth in media reports, if there is any foul play or mischief, we will take strong action," Mr Antony said.

The allegations surfaced recently when media reports suggested that two people have been arrested in Switzerland for allegedly paying kickbacks to secure the 560-million-euros deal for 12 AW-101 helicopters.

Asked if a probe by the Central Bureau of Investigation (CBI) would be ordered into these allegations, Mr Antony said, "First let us get facts and details from the UK and Italy and then we can see what can be done."

On reports suggesting that his predecessor had changed the qualitative requirements of the VVIP chopper deal, Mr Antony said the staff requirements for procurement of equipment are prepared by the Services headquarters.

Asked about the situation in Jammu and Kashmir, the minister said violence levels have come down but increasing infiltration attempts is a "matter of concern".

"Attempts of infiltrations are not reducing but increasing and that is a matter of concern. That is why I said that we cannot take a decision on AFSPA in a hasty manner," the Defence Minister stated.

A few days back, Mr Antony had said violence levels in the terrorism-affected state have come down but the infiltration levels were on a rise.

To a query on Siachen, the Defence Minister said, "Our stand on the issue is very clear. There is no change in it and we are not for its (Siachen's) demilitarisation."

The minister was asked if the government was considering the recommendations of a group to remove the armed forces from the world's highest battlefield.
Comments
AK AntonyHelicopter deal