Rahul Gandhi is leading the Congress party's 'Bharat Jodo Yatra', which entered in 18th day in Kerala on Wednesday. 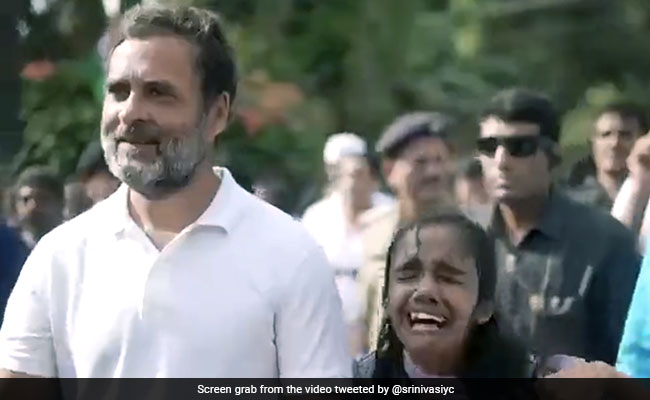 A girl couldn't control her emotions after meeting Rahul Gandhi, who is leading the 'Bharat Jodo Yatra' of the Congress party. A video shared by party leader Srinivas BV shows the girl jumping with joy, laughing and crying at the same time after being allowed to join the Congress leader during the march. Mr Gandhi asked the girl to join him on the course of the journey and other participants walking along with him smiled at her excitement. Mr Gandhi embraced her and tried to calm her down.

The BharatJodo handle run by the Congress party also tweeted the video saying, "No caption needed. Only love."

No caption needed.
Only love ♥️#BharatJodoYatrapic.twitter.com/LSnbCEBk5v

Another video showed Mr Gandhi smiling and lifting a child on his shoulders. "Lift them up... Be their support... Be their shoulder to lean on," the handle said in its tweet.

The incident took place on the 18th day of the march. It started from Pandikkad School Padi in Kerala's Malappuram and entered Mr Gandhi's Wayanad constituency during the day.

One of the video from Wayanad showed the Congress leader interacting with a number of locals and actor and director Ramesh Pisharody joining the march.

On Tuesday, Mr Gandhi interacted with the farmers from various districts of Kerala with the aim to understand their challenges better.

The participants in the conversation were farmers from the districts of Idukki, Wayanad, Kozhikode, and Kasaragod. The interaction was held at Pattikkad in Malappuram district during a halt of the 'Bharat Jodo Yatra'.

The Congress' 3,570 km and 150-day long march started from Kanyakumari in Tamil Nadu on September 7 and will conclude in Jammu and Kashmir.

The yatra, which entered Kerala on September 10, will traverse through the state covering 450 km, touching seven districts before entering Karnataka on October 1.