Yogesh Verma is the Samajwadi candidate from Hastinapur constituency in Meerut district. The exit polls have predicted that Uttar Pradesh will stay firmly with the BJP. 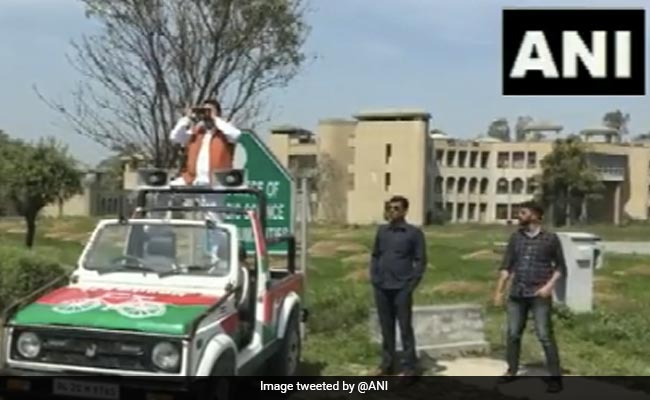 The counting of votes will take place on Thursday (March 10).

A Samajwadi Party candidate standing in an open jeep, binoculars to his eyes is hard at work: he is keeping a vigil at an EVM strongroom in Uttar Pradesh's Meerut district.

Yogesh Verma, the Samajwadi candidate from Hastinapur constituency in Meerut district, and his supporters are keeping watch on EVMs for 24 hours by maintaining an eight-hour shift.

"What happened in West Bengal? Exit polls had said BJP would come to power but Didi (Mamata Banerjee) formed the government with the full majority. Exit polls are wrong. And it has been a history that the Hastinapur MLA and chief minister of Uttar Pradesh have been of the same party," the Samajwadi leader was reported saying by news agency ANI.

Mr Verma said he has full faith in administration but he does not want to take any chance for the protection of the people's mandate.

The exit polls have predicted that Uttar Pradesh will stay firmly with the BJP.

An aggregate of exit polls gives the BJP and its allies 241 of the state's 403 seats - the majority-mark is at 202 - with Akhilesh Yadav's Samajwadi Party finishing second with 142 seats.

Mr Choudhary termed the exit polls an attempt to create 'pressure' and said they demoralise people who want a change in Uttar Pradesh.