Customs officials arrested a housekeeping staff member along with 1.811 kg of gold paste at the Chennai International Airport. 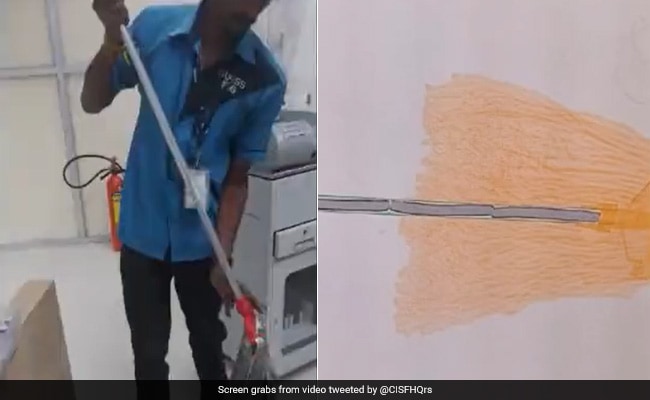 A portion of the gold was also found concealed in the shoes of the staff.

Airport authorities in Chennai on Thursday recovered approximately Rs 70 lakh worth of gold paste concealed in a cleaning mop handle that was carried by a housekeeping member. Taking to Twitter, the Central Industrial Security Force (CISF) informed that Customs arrested the man along with 1.811 kg of gold paste at the Chennai International Airport.

The housekeeping staff was allegedly trying to smuggle the gold through the mop, the officials said. They added that once they placed the mop under the scanner, they found some objects inside the metal rod. Further, upon physical check by opening the mop pipe, around 10 pieces of small sticks of gold paste, wrapped with black tape, were found.

Always alert & vigil to protect & secure!#CISF nabbed a housekeeping staff along with 1.811 kg gold paste (worth approximately Rs 70 lakh) concealed in "Cleaning Mop" @ Chennai Airport. The staff was handed over to Customs.@HMOIndia@MoCA_GoI@JM_Scindiapic.twitter.com/9WOuIf8Zds

As per news agency PTI, "The staff was attempting to smuggle the gold through the transit area and was nabbed by the help of CISF personnel," the official press release said. It added that a portion of the gold was later also found concealed in the shoes of the staff.

In total, 1.9 kg gold worth Rs 83.68 lakh was recovered under the relevant section of Customs Act, 1962, and the individual was arrested, the press note read.

Meanwhile, last month, the Customs authorities in Chennai also seized over three kilograms of gold bars worth Rs 1.64 crore concealed in the toilet of an airplane that arrived from Dubai.

The airport wing sleuths of the customs department while rummaging the aircraft belonging to a private airliner on its arrival from Dubai retrieved as many as 32 gold bars concealed in the front toilet of the plane, the officials informed.