The rally by Northern Command soldiers paid tribute to the soldiers before covering another 130 km to reach the picturesque Nubra valley today. 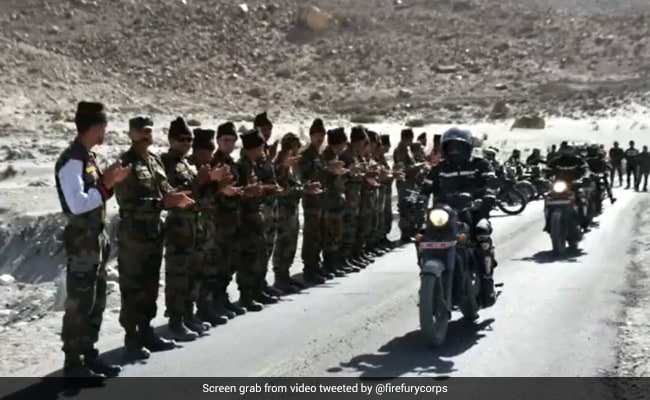 The Army bike rally was flagged from Karu near Leh.

An Indian Army team of bikers paid a special tribute to the Galwan heroes, riding through the tough mountainous terrains of Ladakh.

The rally by Northern Command soldiers, which was flagged from Karu near Leh, paid tribute to the soldiers on Friday before covering another 130 km to reach the picturesque Nubra valley today, passing through Agham and Khalsar villages along the Shyok river.

Twenty Indian soldiers were killed in a confrontation with their Chinese counterparts in mid-June, 2020, in Galwan Valley, leading to a bitter border stand-off between the two countries.

The Indian Army has now built a memorial at Post 120 in eastern Ladakh.

The Galwan confrontation completed two years last month. Defence Minister Rajnath Singh, who was in Kashmir last month, paid tributes to the soldiers killed in the clash. "Their courage, bravery and supreme sacrifice will never be forgotten," he said.