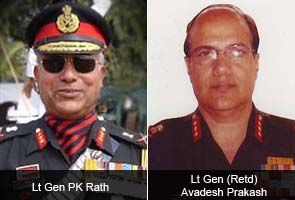 If convicted Rath will be the first serving Lt Gen to be convicted in a court martial.

Another Lt Gen, but now retired Avadesh Prakash, the former Military Secretary is also facing a court martial but that will happen only after this verdict.

Also whatever be the verdict against Gen. Rath, it will have to be confirmed by the Army Chief and the MoD. Also he retains the option of going to Court (either the Armed Forces Tribunal or the Supreme Court).

Gen Rath as Corps Commander in Sukna (33 Corps) first gave the NoC for transfer of a tea garden land to a private builder in December 2009, allegedly at the behest of Avadesh Prakash.

It was his chief of staff, the then Maj Gen (now a serving Lt. Gen and DG, Military Training) Ramesh Halgali who blew the whistle and objected to the NoC being granted.

Halgali, was initially rapped on the knuckles but now he has been cleared of all charges. The action was initiated by the current Chief, Gen. VK Singh in his capacity as Eastern army Commander after Halgali blew the whistle.