Before and after images with fairly incredible clarity show the magnitude of the avalanche.

High resolution images available with NDTV indicate the clearest ever sequence of events leading up to the glacier burst in Uttarakhand's Chamoli on Sunday, which left 30 dead and over 170 missing.

Before and after images with fairly incredible clarity show the magnitude of the avalanche.

An image from February 6 shows an ice and snow covered ridge line, a part of the Trishala glacier. But after the avalanche, on February 8, an entire chunk of ice is missing. 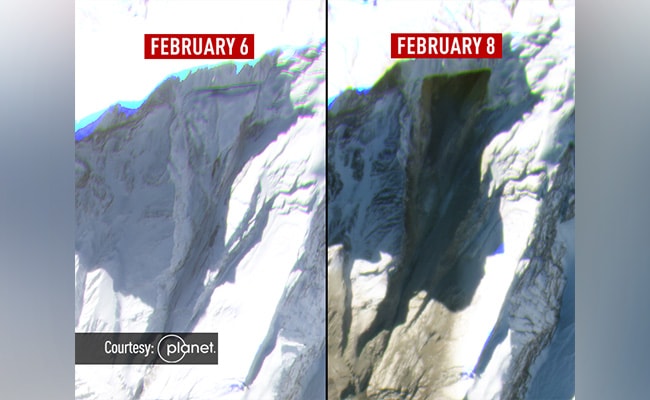 A day before the avalanche (left) and the day after. Click here for high resolution image 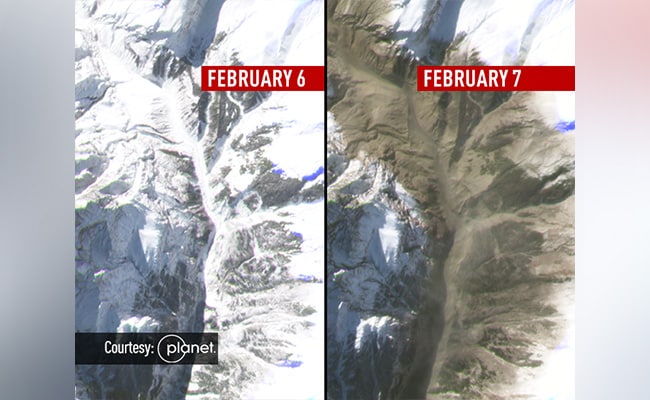 On the day of the quake a massive chunk of ice and snow just disappeared. Click here for high resolution image 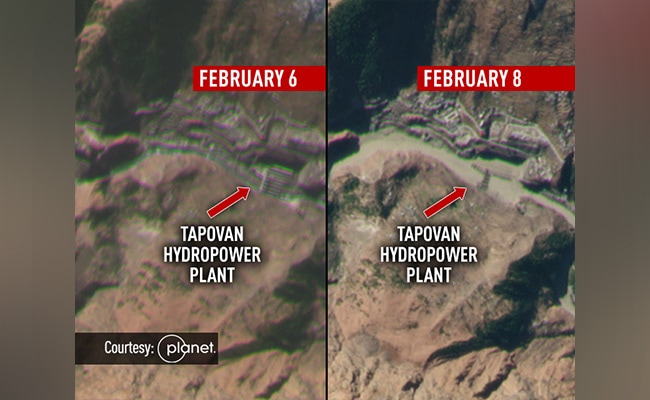 Flow of the river near the Tapovan hydel plant which has since been destroyed. Click here for high resolution image

Similar changes are seen in an area a few kilometres from where the avalanche was triggered. The area was snowed under but after the avalanche, the impact is visible. On the day of the quake, a massive chunk of ice and snow just disappeared.

The river near the Tapovan hydel plant, which was washed away, was a narrow stream of green-coloured water on February 6. On February 8, it became a broad river of brown mud.

A long shot of the entire area highlights the scale of the destruction.

On February 6, the day before the avalanche, the Tapovan hydel plant could be seen. That is where the avalanche would hit a day later. The path of the landslide and dust are clearly visible in the images. On February 8, after the dust clears up, it is all a field of debris.

Experts believe a block of rock, with some ice, dropped almost two kilometres before hitting the valley floor, generating a huge rock and ice avalanche, which raced down the glacier at a high speed. The images indicate that on the way, it generated a vast quantity of dust that was smeared on the valley side.

"Appears to be a complete detachment of a previously glaciated slope," posted Scott Watson.

3D rendering of @planetlabs image collected 7th Feb showing the source of the Uttarakhand disaster located by @WaterSHEDLab. Appears to be a complete detachment of a previously glaciated slope #Chamoli#Disaster#Landslidepic.twitter.com/SElrZh36kH

The rock avalanche will have generated a huge amount of heat and will have induced fragmentation, experts say. The ice was likely crushed and melted, which caused the landslide to transition to a flow of debris.

Home Minister Amit Shah, in a statement on the tragedy in parliament, said: "It is observed from the satellite data (Planet Lab) of 7th February, 2021 in catchment of Rishi Ganga river at the terminus of the glacier at an altitude of 5,600m, a landslide triggered a snow avalanche covering approximately 14 square km area and causing a flash flood in the downstream of Rishi Ganga River."