The helicopter was partially damaged but both the pilot and the co-pilot managed to escape with minor injuries, DG (law and order) Ashok Kumar said. 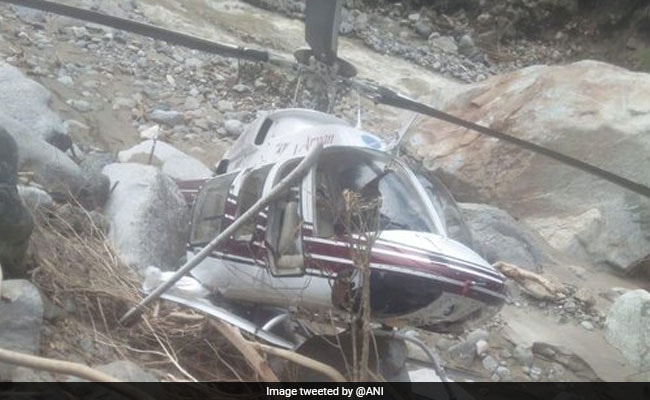 The crew of a private helicopter engaged in relief operations in the rain-ravaged Uttarkashi district of Uttarakhand had a narrow escape on Friday after the copter made an emergency landing on the banks of a river near Tikochi.

The helicopter belonging to Aryan Aviation was on its way to Chiwa to distribute relief material when it had to make an emergency landing on the banks of the river at Nagawada near Tikochi, Uttarkashi District Magistrate Ashish Chauhan said.

The helicopter was partially damaged but both the pilot and the co-pilot managed to escape with minor injuries, Director General law and order Ashok Kumar said.

The incident comes just two days after another private helicopter crashed near Moldi killing all three on board -- the pilot, the co-pilot and a local. The emergency landing of the helicopter on Friday came hours after distribution of relief by air was resumed after its suspension in the wake of Wednesday's copter crash.

An official at Arakot basecamp said the helicopter had to make an emergency landing to avoid getting entangled with the power cables which was one of the factors that led to the crash on Wednesday.

The pilot, Sushant Jeena hailing from Jabalpur, and the co-pilot, Ajit Singh from Haryana, had a close shave, he said.

Relief and rescue operations in Uttarkashi district were launched last week after landslips and cloudbursts triggered by heavy rains caused led to heavy damage in Mori block of the district killing 16 persons and leaving six others missing.

A preliminary official estimate has pegged the losses caused by heavy rains in the district at Rs 130 crore.