Uttarakhand: big and unusual role for the Air Force's C-130J 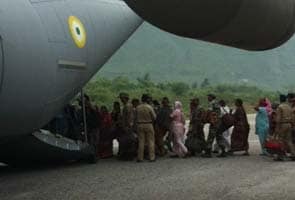 Dharasu/Hindon Air Base: In a very innovative, yet daring move, the Indian Air Force (IAF) today virtually established an aviation fuel supply bridge at Dharasu in Uttarkashi to give greater impetus to rescue operations that have been severely restricted due to non-availability of aviation fuel in the upper reaches of Uttarakhand.

With the road connectivity to Uttarkashi completely broken down, bad weather adversely affecting launch of flying operations from Jolly Grant airfield in Dehradun and the renewed threat of rains - likely to hit the state on June 24 - an out-of-the-box solution seemed to be the only option to sustain rescue operations.

Going by the lay of the land, it was decided to examine the possibility of using the small air strip at Dharasu to establish a forward launch base for rescue operations. However, the challenges were many, including the weather. The length of the air strip is only 1,300 metres and the mountainous terrain posed a great danger to the aircraft making an approach for landing in the prevalent inclement weather conditions.

Moreover, there was no infrastructure to support flying operations of a sophisticated aircraft like the C-130J at Dharasu. But with a true professional approach and calculated risk management, a decision was taken to go ahead with the idea.

After a quick SWOT analysis of the terrain, weather and capability of the aircraft and aircrew, the C-130J was launched from the Hindon Air Base. The objective was achieved when the aircraft, despite the inclement weather, made its first historic landing at Dharasu early in the morning today.

In a first of its kind, the aircraft, after landing, offloaded 8,000 litres of fuel into an empty bowser - airlifted the previous day from Sarsawa by the heavy-lift Mi-26 helicopter - which further put life into the choppers which were starved of fuel till then.

With the availability of fuel at Dharasu, rescue operations picked up pace and, within no time, commenced non-stop flights, establishing a firm launch base by evening.

The C-130J crew was given a new task of airlifting pilgrims from Dharasu to Hindon on its return trip. To start with, 35 stranded pilgrims, some of them needing immediate medical assistance, were put on board and brought to the air base near Ghaziabad, a suburb of Delhi.

Having achieved the first objective, the Air Force quickly embarked upon a mission to establish a virtual fuel supply bridge and use the return trips to rescue the stranded pilgrims into safer locations. The second trip offloaded 8,000 kgs of fuel at Dharasu and picked up 101 passengers (80 adults and 21children, including two who were brought on stretcher) and brought them back to Hindon. Having transferred the required fuel at Dharasu, the third trip of the day was used to airlift the medical team of the Air Force to provide immediate assistance to the needy passengers awaiting airlift at Dharasu itself. This writer and a cameraperson colleague was on the third flight.

Promoted
Listen to the latest songs, only on JioSaavn.com
Having paved the way for fixed-wing aircraft operation from Dharasu, the Air Force quickly pressed its An-32 into action. The An-32s carried Disaster Communication Equipment Vehicles of the Air Force, some more fuel in Barrels, Sudan pumps for refueling the helicopters and bridging equipment of the Border Roads Organisation or BRO. By evening, a firm base had been established which will now see some very hectic flying in the days to come, including providing assistance to BRO to airlift some of its heavy road repair and construction machinery in rehabilitation work.

June 22, 2013 will remain a significant milestone in the Indian Air Force's history.