The rifle - used by the British during the two World Wars - fires one shot at a time, after which the barrel needs to be reloaded by pulling the bolt. 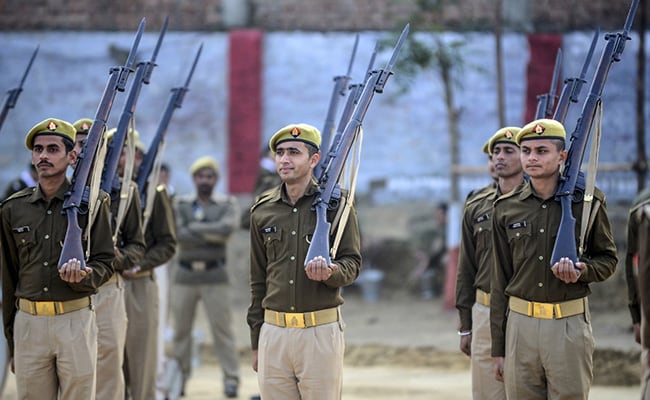 Lee-Enfield .303 rifle has been the main weapon of the UP police for over seven decades

Uttar Pradesh police on Sunday bid goodbye to the historic British-era bolt-action rifles after using them for one last salute during the Republic Day parade.

The Lee-Enfield .303 rifle was the main firearm of British colonial military forces and, despite being designated "obsolete" around 25 years ago, it has been the main weapon used by the UP police for over seven decades.

The rifle - used by the British during the two World Wars - fires one shot at a time, after which the barrel needs to be reloaded by pulling the bolt.

"They have been in use since independence (from the British in 1947) and now they'll be replaced by INSAS (Indian Small Arms System) and SLRs (Self-Loading Rifles)," said UP police superintendent Amit Verma.

As many as 45,000 of the rifles were being used by the state police, Mr Verma said, and the model was a favourite among constables due to its accuracy and sturdiness.

"This (.303) rifle is a fantastic weapon and has served us brilliantly in various operations in the past," senior police officer Bijaya Kumar Maurya told AFP.

"But it being a bolt action weapon with low magazine capacity, it was time for a change. Its production has also discontinued so there was all the more need for an upgrade."

Mr Maurya said the new automatic rifles would "add to the confidence of our officers" and would result in improved policing".

"The criminals will naturally face the heat when they'll face officers armed with automatic weapons."

The rifles will be returned to a gun factory in West Bengal's Ishapore where they will be converted into anti-riot guns, spokesman Saurabh Singh told AFP.

Saroj Kumar Mishra, a constable with Uttar Pradesh police since 1982, said he would miss the heavy-duty rifle.

"The weapon is as smooth as butter even after 20 rounds of back-to-back firing," he was quoted as saying by the Hindustan Times newspaper.

"This feature is perhaps the most important one which we often miss in the modern day weapons."