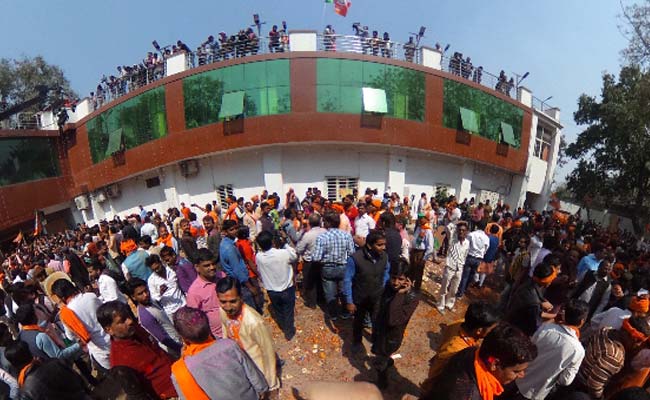 The BJP had learnt many lessons from its 2015 debacle in the Bihar assembly elections. One of them was not to celebrate too soon, and wait for the election trends to stabilise. Today, as a small group of workers came in early at the party's Lucknow office, there were no advance deliveries of flowers or sweets.

And then, the results started trickling in. As the spread and margin of the BJP's spectacular victory in the Uttar Pradesh elections started sinking in, the crowds started swelling, getting louder and colourful. The BJP needed 202 seats to come to power in the 403-seat assembly. It ended up with a landslide score of 312. But as the trend became clearer towards noon, people brought in the sweets, flowers and colours. It was Holi two days in advance -- workers danced to victory slogans, hugged each other and sprayed each other with colours as the party's gains seemed irreversible.

"Uttar Pradesh has fulfilled our dream of 300 seats this time," declared Keshav Prasad Maurya, the state party chief who got the job just 11 months ago. Soon, his face too was smeared with colour by jubilant party workers.

Less than 3 km away, outside the Samajwadi Party office, party workers had removed Congress vice president Rahul Gandhi's cut-outs from outside the party office well before the counting started. Later Chief Minister Akhilesh Yadav insisted the alliance would survive the crash landing. For a long time, small groups of party workers who had gathered spoke with hope how the trends could change. Others trooped to the temple down the road.

A few hours later, they gave up. The writing was on the wall.

By the evening, the BJP had won 312 seats and a 39 per cent vote, just three percentage points less than 2014 general elections' 42 per cent vote share when the party had netted 71 of the state's 80 Lok Sabha seats.

The office of the Congress, which conceded that its organisational structure in the state was in shambles, wore a deserted look through the day. Ditto the BSP office that ended in the third place, after the BJP and the SP.

Promoted
Listen to the latest songs, only on JioSaavn.com
But if the BJP's one-step-at-a-time approach ensured it did not trip during either the campaign, or the celebrations, the AAP seemed to trip in the all guns blazing style. It repeated the BJP's mistake in Bihar, possibly encouraged by the exit polls that forecast it was within striking distance in Punjab.

Before the counting started, enthusiastic party workers had gathered outside Delhi Chief Minister Arvind Kejriwal's home. The venue was decorated with rows of green, saffron and white balloons and LED screens installed to keep the crowds informed about the good news as it comes. And then there was a stack of brooms, the party's election symbol that could be waved for the cameras. AAP did end up as the second largest party in Punjab - a distant second. Late in the evening, the brooms were quietly packed up and taken away.