US ship anchored in Gujarat is not leaking 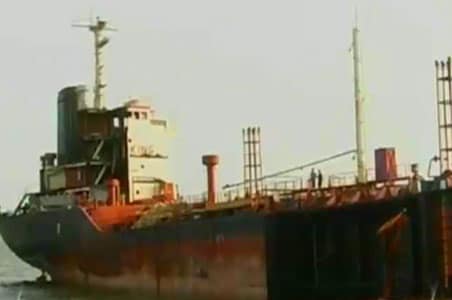 Ahmedabad: The central team inspecting the ship allegedly carrying radioactive substance near Alang coast on Tuesday ruled out any leakage in the vessel as alleged by its owner.

The team comprising senior advisor from the ministry of steel, head of the radiology safety division, Atomic Regulatory Board, and officers from the environment ministry inspected the ship 'Platinum II' anchored near Gopnath, some 40 nautical miles from the Alang coast in Bhavnagar district.

They were accompanied by officials of the Gujarat Maritime Board (GMB). The team members ruled out any leakage in the ship, as alleged by its owner Komalkant Sharma of Leela Ship Breaking Ltd on Monday.

"There is absolutely no leakage in the ship. Our inspection is still on," one of the central government team members said.

Sharma had on Monday claimed that there were cracks at the bottom of the ship because of which the water had started entering it during high tide. He had claimed that he had written to the GMB about the issue, but there was no action from their side.

The Central team is here as part of an inquiry ordered by Environment Minister Jairam Ramesh last week after NGO Indian Platform on Ship-breaking (IPOS), alleged that Platinum-II (previously known as S S Independence and S S Oceanic) was loaded with toxic Polychlorinated Biphenyl (PCB) along with radioactive substances.

It further claimed that the Platinum-II is loaded with an estimated 210 tons of toxic polychlorinated biphenyl (PCB) contaminated material and an estimated 250 tons of asbestos as part of its construction.

However, the Gujarat Pollution Control Board has said that the ship's 200 tonnes of asbestos as well as its toxic polychlorinated biphenyl can be handled here in keeping with the Supreme Court's guidelines for ships with toxic cargo.

The US Environmental Protection Agency (EPA) fined the owners of Platinum-II (then known as SS Oceanic), Global Shipping LLC and Global Marketing Systems for alleged illegal distribution and export of a PCB-containing ship in January 2009, IOPS had claimed.

The companies were made to pay a total of USD 5,18,500 to resolve the two Toxic Substances Control Act violations.

Promoted
Listen to the latest songs, only on JioSaavn.com
PCB is a persistent toxic pollutant used in paints, insulation and gasketry in older ships.