On J&K, Indian Journalist's Face-Off With Ilhan Omar In US Congress Kashmiri Muslims have suffered most from terror attacks by Pakistan-sponsored terrorists and this had been overlooked by Western activists and world media for years, senior journalist Aarti Tikoo Singh said at a US congressional hearing on Tuesday. Ms Singh also called the hearing "prejudiced, biased, a setup against India and in favour of Pakistan".

The journalist was speaking at the US House Foreign Affairs Committee hearing on "Human Rights in South Asia" in Washington.

"The number of Kashmiri Muslims who have been killed in Kashmir is immense and they have been victimised by the Pakistani terror state. The 30 years of Islamic jihad and terror in Kashmir perpetrated by Pakistan has been completely ignored and overlooked by the world press," said Ms Singh. 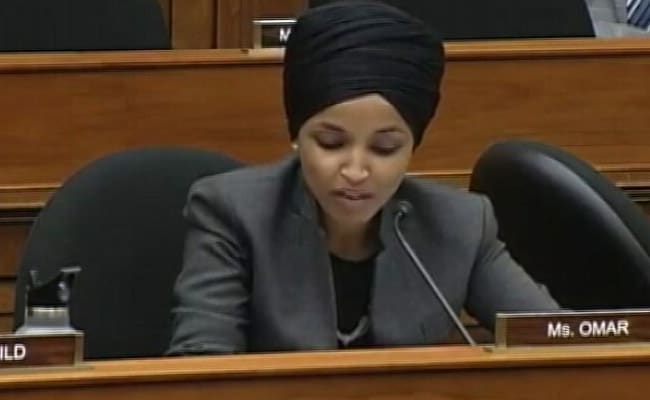 Aarti Tikoo Singh had a sharp exchange with US Congresswoman Ilhan Omar.

During her testimony, Ms Singh had a sharp exchange with US Congresswoman Ilhan Omar, who suggested that the journalist was catering to an audience back home and making "incredibly dubious" claims. "Ms Singh, a reporter's job is to find the objective truth about what is happening and report it to the public. You have an enormous audience at The Times of India and you have an enormous responsibility to get it right. I am aware of how the narrative shaped by reporting can distort the truth. I am also very aware of how it could be limited to sharing only the official side of the story. The press is at its worst when it is a mouthpiece for a government. In your version of the story, the only problems in Kashmir are caused by what you call militants, the only people protesting to break away from India; and are all nefariously backed by Pak. You also make the incredible dubious claim that the Indian government's crackdown in Kashmir is good for human rights. If it was good for human rights, Ms Singh, it wouldn't be happening in secret. You make, what I might call, a feminist case for the occupation of Kashmir and communication shutdowns, saying it will be better for women."

Ms Singh retorted: "My record, my professional record is that I have lashed out at every single government in India on various issues, from human rights violations committed in Kashmir to the lynchings over beef. I have a record of being non-partisan throughout in my profession of the last 20 years. So for Ms Omar to say... such accusations against me, is really condemnable."

The Indian Army is on high alert to stop terror attacks in Jammu and Kashmir and help the civilian administration. (File)

A group of US lawmakers expressed concern about the situation in Jammu and Kashmir amid security restrictions since August 5, when the government announced the end of special status to the state and split it into two union territories.

The lawmakers called for the release of detained politicians and activists and an end to restrictions on communication and movement of people. Alice Wells, the Acting US Assistant Secretary of State, welcomed the centre's actions to normalise the situation in Jammu and Kashmir but added: "While the Department supports the development objectives of India's move to abrogate Article 370, we remain concerned about the situation in the Kashmir Valley... It has not returned to normal."

"While they are rightly highlighting the instances of violations committed by the Indian security, the story is often presented without context and historical understanding and it also carries a lot of certitude and self-righteousness of a narrative that helps the perpetrators and not the human rights abuse in Kashmir," she added.

She spoke about senior journalist Shujaat Bukhari, who was killed last year.

He believed in peace and dialogue between India and Pakistan, she said. "He went from city to city across the world trying to convince the powerful players that Kashmir needs peace. But on June 14, 2018, he was shot dead right outside his office in Srinagar by Lashkar-e-Taiba (LeT), the same terror outfit banned by the United States that also perpetrated the 2008 Mumbai terror attacks," Ms Singh said.

"Why did they kill him? Because Shujaat wanted Pakistan to end violence and human rights abuse in Kashmir. They killed him because he wanted peace."

The journalist also talked about other victims of Pakistan-sponsored terrorism in Kashmir, including a Kashmiri businessman shot dead on August 29 because he had opened his shop defying the orders of Jaish-e-Mohammed (JeM).

Pointing out that it was "the same terror group responsible for the 2002 killing of Wall Street Journal reporter Daniel Pearl", Ms Singh said: "Jaish, in the last two months, has been issuing posters, warning Kashmiri Muslims not to resume their normal lives."

A different viewpoint came from Nitasha Kaul, a London-based academic who said there was a "humanitarian crisis" in Kashmir.

"What we are asking here is really very simple, we are asking for human rights, democracy and for the question of freedom that people who are being fired upon for just gathering, non-violently over the years. There should be an acknowledgement from the state saying that we are sorry," she said.

"The communal politics does not serve the Indians and Kashmir. If Kashmir were a communal issue then Muslims in India would feel the same as Kashmiri Muslims, and they do not. So it is not a communal issue it is an issue that has been communalised," said the professor.