For the Tejas that is being inducted in the Air Force, it is also seen as the biggest endorsement of the fighter that has been in the making for more than three decades.

New Delhi: General David L Goldfein, Chief of Staff of US Air Force flew in India's indigenous light combat aircraft, the Tejas, this morning, in a special flight that took off from the Jodhpur Air Force Station, signalling the soaring ties between the two air forces.

The US Air Force chief was accompanied by Air Vice Marshal AP Singh as co-pilot during the 40-minute sortie. General Goldfein is the first foreign chief commander to fly in the multi-role light fighter, which is being pitched as the replacement of the ageing MiG-21 aircraft.

The top ranking US military officer had reached India on Thursday on an official visit to deepen relations. "There is already a strong relationship between our two air forces and I'm looking forward to making it stronger," he wrote in a Facebook post shortly after being welcomed at Air Headquarters in the national capital.

He also referred to the IAF's acquisition of the C-17 Globemaster transport aircraft that is capable of lifting tanks to the border with China and Pakistan. "The IAF operates the second largest C-17 fleet in the world and continues to mature their fleet operation to support regional mobility needs," the US Air Force Chief said. 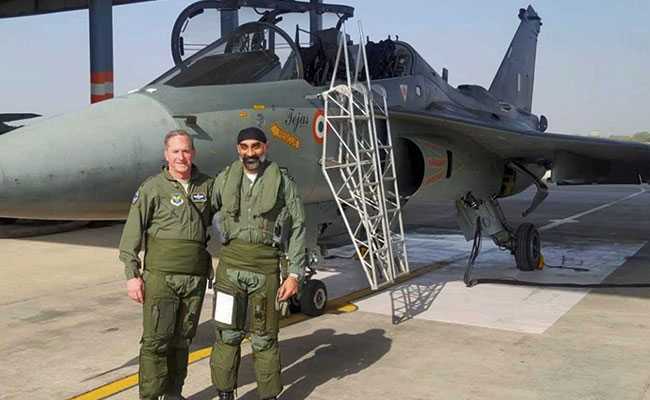 For the Tejas that is being inducted in the Air Force, it is also seen as the biggest endorsement of the fighter that has been in the making for more than three decades.

Ng Eng Hen, the Defence Minister of the island nation of Singapore had gone on a sortie from the Kalaikunda airbase in West Bengal last November. "I am not a pilot," he had later said, "but I can say it felt... really smooth".

A command pilot with 4,200 flying hours, the Chief Of Staff of US Air Force has flown combat missions in operations during the Gulf War, Afghanistan and the erstwhile Yugoslavia. It was during one of these missions over Serbia back in 1999 when his fighter jet was hit by a surface-to air missile. He successfully ejected and was rescued.

Under development for more than three decades, the indigenous Tejas, earlier known as the Light Combat Aircraft or LCA is the first fighter jet to be built in India since the HF-24 Marut designed several decades earlier.

Promoted
Listen to the latest songs, only on JioSaavn.com
Severely criticised for delays in its development, the Tejas fighter has belatedly shown promise as a jet far more capable than the MiG-27 and the MiG-21, legacy fighters which the Indian Air Force is in the process of retiring.

In December last year, the government paved the way for the manufacture of 83 indigenous Tejas Mk-1A Light Combat aircraft by Hindustan Aeronautics Limited. The deal is likely to be worth close to 60,000 crores and would be among the largest ever deals the government has sanctioned for the domestic arms sector, a huge boost for the government's 'Make in India' defence manufacturing programme.