Uddhav Thackeray has been vocal in his criticism of the killing of Avni and had termed the state's government's decision to set up a committee to probe the killing as a "farce". 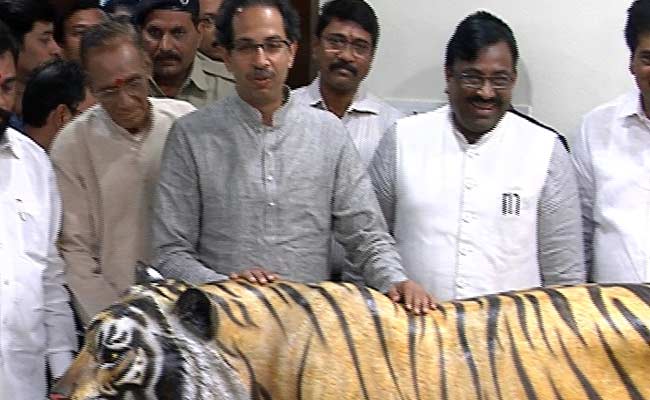 Senior BJP leader Sudhir Mungantiwar has said he is upset at Shiv Sena chief Uddhav Thackeray's criticism of him on tigress Avni's killing, and therefore is not willing to participate in alliance talks with the latter.

Mr Mungantiwar, the state's Forest minister, has been at the centre of attacks from politicians like Mr Thackeray and Union minister Maneka Gandhi as well as animal rights groups for the killing of tigress Avni, allegedly a man-eater, on November 2 in Yavatmal.

Speaking to the media, Mr Mungantiwar claimed when he called up Mr Thackeray to convey his disappointment over the latter's remarks, the Sena chief told him that Union minister Maneka Gandhi had asked him to do so.

"I told Uddhav ji I was deeply hurt by his remarks over the Avni episode. I did not expect this from him, especially when I considered him a good friend. During the course of the conversation, he told me Maneka ji had called him and asked him to oppose the killing of the tigress," he said.

Mr Mungantiwar further said he was in favour of an alliance with the Sena at a time when nobody else in the party was willing to do so, as they (party colleagues) were irked with the Sena's constant criticism of the BJP and the state government.

"Despite this, he indulged in cheap criticism of the episode. I am no more willing to hold alliance talks with him now," Mr Mungantiwar, who has been instrumental in trying to get the Sena on board for the forthcoming elections, said.

Speaking about the anguish the Avni episode had caused him, Mr Mungantiwar said, "I am not active on social media platforms. However, when my daughter showed me the messages posted on Twitter and Facebook, I was deeply upset. People used abusive language against me. I felt upset when I saw my family in distress reading such messages."

When approached for a response, Maneka Gandhi, Union Minister for Women and Child Development, refused to comment.

Mr Thackeray has been vocal in his criticism of the killing of Avni and had termed the state's government's decision to set up a committee to probe the killing as a "farce".

Mr Thackeray had also said if Chief Minister Devendra Fadnavis backed Mr Mungantiwar saying he could not be held responsible for the killing, why did Prime Minister Narendra Modi take credit for the surgical strike, when the PM had not himself conducted it.