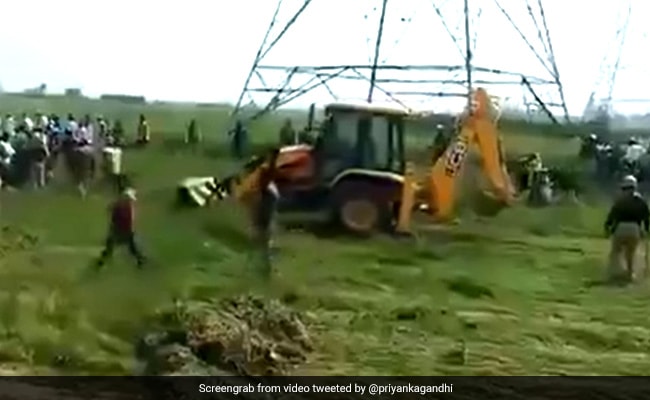 The visuals of UP government officials crushing crops have led to an outrage. (Twitter)

Visuals of UP government officials crushing crops in eastern Uttar Pradesh's Mirzapur district have led to an outrage, with Congress leader Priyanka Gandhi Vadra tweeting about the incident.

"In Mirzapur, farmers had grown their crop with a lot of effort but the BJP government and the police have trampled upon the crop. Just yesterday (Saturday), the Prime Minister and the Chief Minister had given a host of false assurances to farmer. It has not even been 24 hours but look at how the government is behaving with women farmers. An anti-farmer attitude is embedded in the BJP," the Congress leader tweeted this morning along with a video.

The Congress leader was apparently referring to the launch of 10,000 Farmer Producer Organisations, which the Prime Minister said, was aimed at increasing farmer's income.

"Nearly Rs 12,000 crore has been deposited in accounts of over two crore farmers' families in UP itself," the Prime Minister had said in one of the many claims he made at the event in Madhya Pradesh's Chitrakoot.

Another video, shared by farmers over phone, showed a JCB machine repeatedly crushing the crop, while one video showed a woman farmer lying on the destroyed crop and weeping.

The government officials said that the land had been acquired by the Indian Railways for a project several years ago, while the farmers claimed that their demands were not met and they were allowed to harvest the winter crop.

"The land has been acquired. The farmers want jobs and many other things. But many of these demands cannot be conceded. That is why the local authorities had to take the land in their custody. We have also taken a memorandum for the chief minister from the farmers," said UP Singh, a senior UP government official in the area.

Farmer leaders in the area admitted that some of the land was indeed acquired but claimed that there was a dispute over compensation.

"The farmers were sitting at home. Suddenly these government officials arrived and they started trampling on their crops," said Prahlad Singh, a leader with the farmer's organisation Bharatiya Kisan Union.

"The farmers fell at their feet but they did not relent. We want compensation for our crop. There was an agreement in November 2019 where it was decided they would let the winter crop be harvested About 1000 farmers are affected . Why did the district magistrate not meet us . Why this arbitrary action ?" he added.

Some government sources said that the Railways was not able to start work because of in the area because of "encroachment" and the same led the police action.

When asked why the officials didn't wait till the harvesting, Mr Singh said that they will "look into the matter".