UP Elections: Former Chief Minister Mayawati's campaign has been muted, but a video of a leader from her party is now being widely shared on social media - and not for the right reasons. 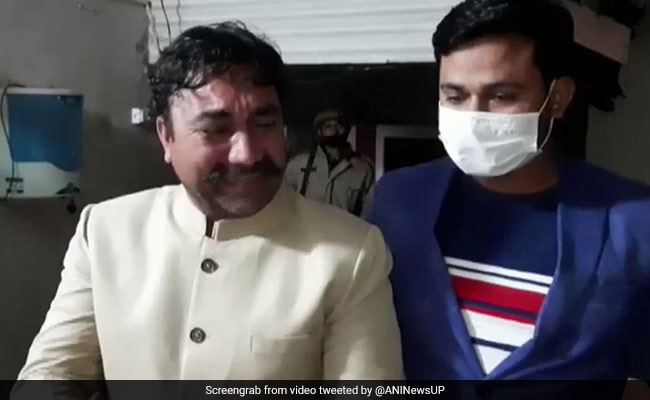 BSP's Arshad Rana is seen bursting into tears over being denied the poll ticket.

Poll defections and accusations are adding to the dramatic build-up in Uttar Pradesh ahead of the seven-phase state polls that start on February 10.

Former Chief Minister Mayawati's campaign has been muted so far, but a video of a leader from her Bahujan Samaj Party (BSP) is now being widely shared on social media - and not for the right reasons.

In the video, BSP's Arshad Rana is seen bursting into tears after he was dropped as a candidate.

"I feel humiliated. I never thought this would happen. They made me sit inside (the office) and told me that they have picked someone else to contest the polls instead of me," Mr Rana says, weeping, in the video tweeted by news agency ANI.

"You must be watching the news reports daily... hoardings and all... I am doing everything. Despite all the efforts, they are doing this to me," he sobs bitterly.

#WATCH | Uttar Pradesh: BSP worker Arshad Rana bitterly cries claiming that he was promised a ticket in UP election only to be denied ticket at the last moment despite putting up hoardings for the upcoming polls pic.twitter.com/DMe8mDHk2J

Mayawati won't contest the state elections, the party has made it clear. Rivals say the BSP doesn't even have enough candidates to fight 400 seats in UP, but party MP Satish Chandra Misra has said they will win the elections.

Arshad Rana's video seems to have bared the internal rifts.

In another video, where he is not crying, Mr Rana makes several claims against the party. "I have been working as a foot soldier for the Bahujan Samaj Party in different capacities. In 2018, I was declared a candidate from Charthawal. For the last four years, I have worked tirelessly for the party. Now, I have been trying to get in touch with the leadership... but not getting a response," he says.

#WATCH | I've been working for 24 years; was formally declared candidate from Charthawal in 2018 (for 2022 UP polls), have been trying to get in touch with party, no proper response; have been told to arrange Rs 50 lakhs...had already paid about Rs 4.5 lakh: BSP's Arshad Rana pic.twitter.com/iIRCOPQ9is

Claiming that he was asked to arrange Rs 50 lakh, he says, "I went to Muzzaffarnagar office and Satish ji (party colleague) asked to arrange 50 lakhs. I said... 'Sir ji, I can't arrange so much money'... I went home and discussed with my mother - she said we will arrange for you since you're working so hard." Mr Rana, in the video, further says he paid some money in installments yet he was denied a poll ticket.

There is no reaction from the party yet over the claims.

Uttar Pradesh will vote between February 10 and March 7 and the results will be out on March 10.

While the BJP is trying to retain the state, Akhilesh Yadav has emerged as the key challenger but Congress and the BSP are also trying hard to come back to power.