UP Cop Starts Own School To Help Underprivileged Children

Police Sub-Inspector Ranjit Yadav began the classes several months ago and the decision came after seeing the parents of these children begging. 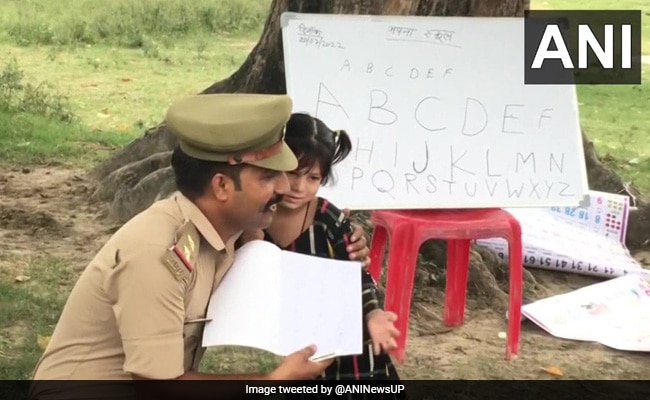 The children are also provided with stationery and books by Mr Yadav.

In a bid to provide a brighter future, a police officer in the temple city Ayodhya offers free education to children from the local areas who hail from downtrodden families.

The children, who are enjoying their classes and want to study further now, would have easily ended up begging if the cop wouldn't have come to their rescue.

"We want to study further and go to school. We feel pretty good while studying here, so now, we regularly come here," said a child.

With multiple young attendees in a class under a tree and open spaces, humanity echoes in the noble cause.

Police Sub-Inspector Ranjit Yadav began the classes several months ago and the decision came after seeing the parents of these children begging.

"I have started my own school and have been teaching these children for several months whenever I get a holiday. I often saw their parents begging, thereafter, I talked to them and many were willing to educate their children," Police Sub-Inspector, Ranjit Yadav told ANI.

The children are seen attending his classes in numbers with over 50 students marking their presence. The children are also provided with stationery and books by Mr Yadav.

In a time where everything took a toll during the Pandemic including the education of young innocent children, Police Sub Inspector Ranjit Yadav's noble thought and deed serve as the first milestone in proving that humanity has a face.