On Friday, Akhilesh Yadav handed over the keys of the government bungalow in Lucknow to the Uttar Pradesh estates department

Lucknow: The ruling BJP in Uttar Pradesh and the Samajwadi Party (SP) on Saturday traded charges on damage to the government accommodation in Lucknow vacated by former Chief Minister Akhilesh Yadav.

Pictures showed damage to some floor tiles and laminations. Air conditioning ducts of the centrally air-conditioned house had been plucked out and some of the electrical switch boards were missing.

A day after Mr Yadav handed over the keys of the posh bungalow to the estates department, the media was allowed access to 4, Vikramaditya Marg.

Mr Yadav vacated the house a few days ago after the Supreme Court ordered last month that former chief ministers of the state could not keep government accommodation.

"The damage done to the bungalow before it was vacated by Mr Yadav shows his frustration", claimed BJP spokesperson Rakesh Tripathi, according to news agency PTI. He said Mr Yadav and his party must answer why the floor and wall tiles had been gouged out.

The BJP alleged that Mr Yadav got a "grand" bungalow built for himself at government expense after realising that he would return to power for the second time. 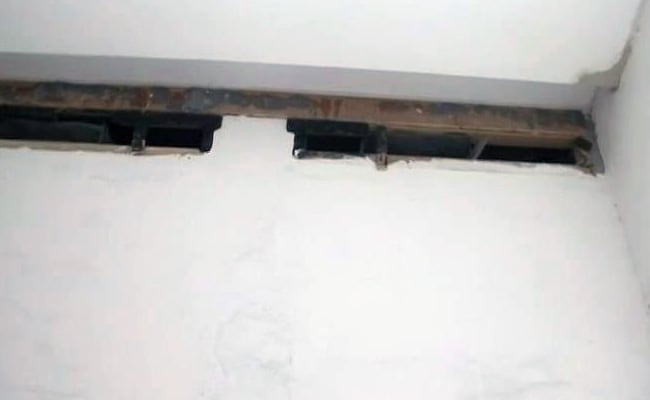 Mr Yadav, whose party won two parliamentary bypolls earlier this year on seats considered to be BJP strongholds, hit back at the ruling party.

"If one has to learn how to defame someone, it should learn from the BJP. The government should say what has been damaged and what is missing", said Mr Yadav.

Estates department official Yogesh Kumar Shukla said an inventory check will be done on what fittings were provided by the government.

The department will serve a notice if it finds any "shortcomings" or "intentional damage," Mr Shukla told PTI.

Promoted
Listen to the latest songs, only on JioSaavn.com
After the Supreme Court order, the state government had issued notices to six former chief ministers --- Narayan Dutt Tiwari, Mulayam Singh Yadav, Kalyan Singh, Mayawati, Rajnath Singh and Akhilesh Yadav. Barring ailing Congress veteran ND Tiwari whose wife has sought more time, all of them have handed over their official bungalows.