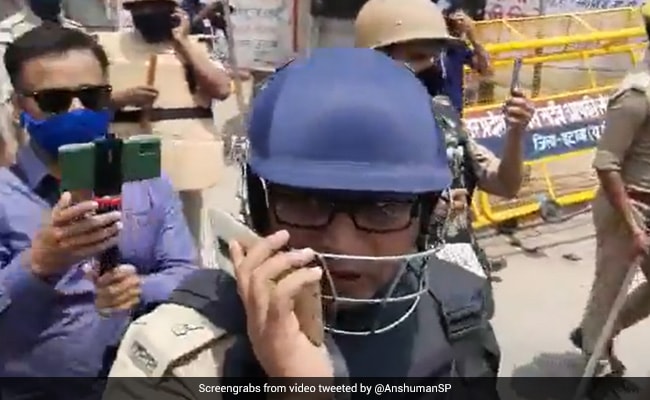 Generally not the ones to be caught helpless, the complaint of a senior Uttar Pradesh police officer on a call with bosses has gone viral as an example of the glaring breakdown of order during local polls in the state set for a keenly awaited election showdown next year.

"These people are throwing bricks and stones sir. They even slapped me. They brought bombs as well. People from BJP. MLA and district chief," Superintendent of Police (City) Prashant Kumar is heard saying in the video shot in Etawah district.

In another video, the police officer is heard talking to the BJP district chief Ajay Dhakre and Sarita Bhadauria with folded hands.

"You all are doing all this," Mr Dhakre yells at him.

"Sir, they are slapping me," Mr Kumar is heard saying.

"No one is slapping you," the BJP leader replies, agitated.

"They did sir, over there," the police officer says, asking them to move away.

"I was here on the side. The police were clashing with us. Our district chief fell down on the road," she said.

Etawah was among the 17 districts where the police said violence flared during the block panchayat chief elections on Saturday.

Senior Superintendent of Police, Etawah Brajesh Kumar Singh told reporters, "When the mob was asked to stop from coming near the polling booth, it started stone-pelting and firing. We have all the CCTV footage. We will investigate once the election is over. A case will be filed soon."

In another video, a TV journalist in Unnao was seen being mercilessly beaten up by a senior bureaucrat.

Voting for the block panchayat chief polls began at 11 am on Saturday across Uttar Pradesh and ended at 3 pm with the counting of votes starting soon after. The BJP claimed a "historic win" amid complaints by the opposition of widespread rigging and clashes.