UP Elections 2022: Taking aim at the ruling party, Akhilesh Yadav said, "They're perturbed. They can't seem to remember the day when he joined us." 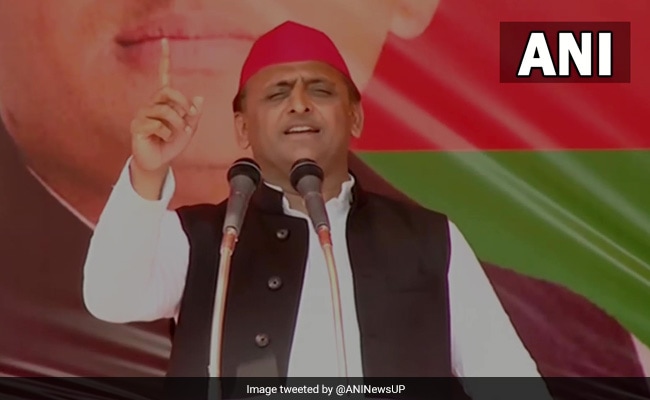 UP Elections 2022: The Fazilnagar constituency will vote in the sixth round on March 3.

As polling for the fifth phase of assembly elections in Uttar Pradesh draws to a close, Samajwadi Party chief Akhilesh Yadav is back at rallies taunting the ruling BJP and shoring up support for fellow candidates. Addressing a massive gathering in the Fazilnagar constituency, he praised former Uttar Pradesh minister Swami Prasad Maurya and claimed he has been waiting "since 2011" for the OBC leader to join his party, news agency ANI said. Mr Maurya is one of several high profile candidates who recently switched over from the BJP to SP. His departure from the ruling party had caused quite a stir as it came amid the peak of election campaigning when many leaders with relatively less political significance were switching sides. While leaving the party, he accused the BJP of neglecting Dalits and backward classes.

Taking aim at the ruling party, Mr Yadav said, "They're perturbed. They can't seem to remember the day when Swami Prasad Maurya joined us."

The Samajwadi chief added that the state wouldn't have had to see "bad days" for five years had the former minister joined his party after leaving the Mayawati-led Bahujan Samajwadi Party.

Mr Maurya had a long stint with the BSP before joining the BJP. In June 2016, he resigned from all posts of the BSP alleging that a "money for ticket" syndicate was being run by the party. BSP chief Mayawati had denied the allegations then and accused Mr Maurya of promoting dynastic politics within her party.

"Had he joined us in 2017, UP would've been forward today," Akhilesh Yadav said about Mr Maurya.

Mr Maurya is a five-term MLA, a former minister and has also served as leader of the house and leader of opposition in the state assembly. He was serving as Cabinet Minister for Labour, Employment and Co-ordination in Yogi Adityanath's ministry.

He faces a tough challenge in his sixth run for office as he has changed his constituency from Padrauna to Fazilnagar within the Kushinagar district. Mr Yadav campaigning for him and vouching for his work is being seen by experts as a telling sign of the challenge SP faces in Fazilnagar. The BJP has also fielded an OBC leader Surendra Singh Kushwaha against Mr Maurya. The BSP has nominated Ilias Ansari for the seat and he threatens to split the votes of its electorally dominant community. Mr Ansari recently switched over from SP to BSP.

In the 2017 elections in Fazilnagar, Ganga Singh Kushwaha of the BJP defeated Vishwanath Singh of the SP by a huge margin of about 41,000 votes.

The constituency will vote in the sixth round on March 3.