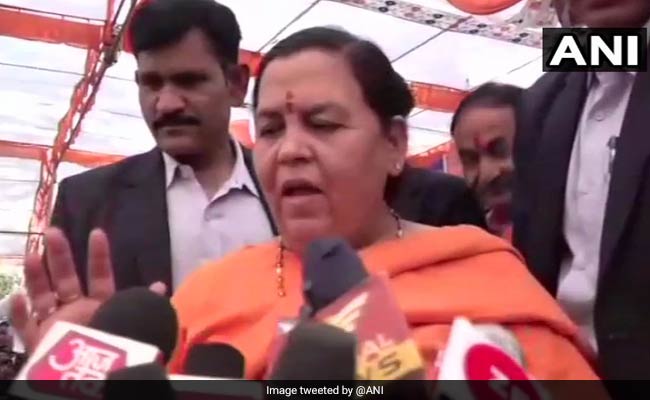 Senior BJP leader and union minister Uma Bharti, who had earlier said that Ram temple is her "dream" as she "actively participated in the Ram Janambhoomi Andolan", wholeheartedly supported Shiv Sena chief Uddhav Thackeray's visit to Ayodhya on Sunday. "Yes, I appreciate Uddhav Thackeray for his effort. BJP doesn't have a patent on Ram Mandir, Lord Ram is for all," Ms Bharti told news agency ANI on Monday.

The SP and the BSP have, however, slammed the BJP for drumming up the Ram temple issue ahead of the 2019 polls, alleging that it is a ploy of the Narendra Modi government to "divert people's attention from its failures."

Attacking the Shiv Sena for "thrashing north Indians", Surendra Singh yesterday said that those who "don't even have the mentality to serve humanity" can't serve Lord Ram and Mr Maurya said that the "Shiv Sena had no role in the temple movement."

Mr Thackeray on Sunday said that the BJP government at the Centre "may not last" if the temple was not built in Ayodhya and demanded that an ordinance be brought in for the temple. He warned that "emotions of Hindus should not be taken for granted" and dared the BJP to admit the Ram temple issue was another "chunaavi  jumla" or "election rhetoric".

The Vishwa Hindu Parishad (VHP) which held a Dharm Sabha at Ayodhya yesterday has planned to hold gatherings in every Lok Sabha constituency till December 6, to garner support for the Ram temple. International working president of VHP, Alok Kumar said that the VHP will "order" the lawmakers to support an ordinance for the construction of Ram temple. VHP's Dharm Sabha concluded in Ayodhya yesterday amid tight security. The group had claimed that two lakh people would attend the event but eventually around 50,000 turned up.