Thousands Of Cops, Drones, CCTVs For Crowd Management In Ayodhya

The district administration and the UP police have made elaborate security arrangements for the VHP rally in Ayodhya, said officials 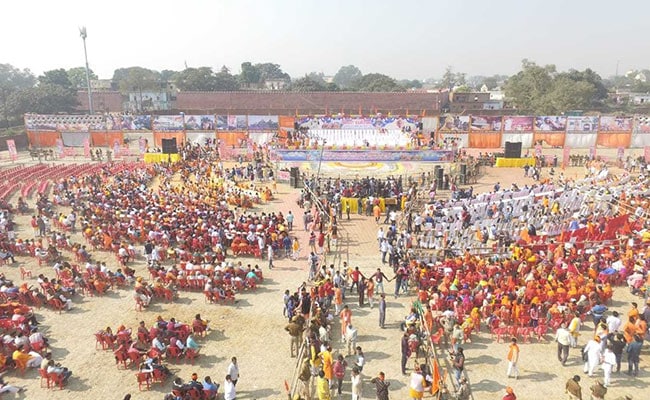 The senior-most police officers of Uttar Pradesh are camping in Ayodhya as thousands of seers and devotees gathered in the temple town for the 'Dharma Sabha' on Sunday. The sabha or congregation organised by the Vishwa Hindu Parishad (VHP) is likely to spell out its stand and strategy, for the construction of the Ram temple at the disputed spot in Ayodhya.

"We have made all the arrangements for the programme (VHP's Dharm Sabha). We've allotted spaces for parking, bypass is running smoothly and we'll ensure it stays like that. Darshan will be from the usual routes. We will do everything in an organized way," said UP police chief, Omkar Singh.

Although, there is heavy security deployment, many were caught violating the prohibitory orders the police said. There are 48 companies of the provincial armed constabulary (PAC) and 15 companies of para-military forces deployed on all major roads. Armed cops have been stationed at barriers in the busy intersections, to control the crowd.

CCTVs have been installed at more than 150 places in Ayodhya and drone cameras were seen hovering over sensitive areas to keep a vigil on surging crowds.

Over a hundred Hindu seers, including Mahant Ravindra Puri, Mahant Suresh Das of the Digambar Akhada, head of the Ram Janmabhoom Trust Mahant Nritya Gopal Das, Swami Gyananad Giri from Odisha and others are part of the congregation today. VHP leaders claimed that devotees and Ram temple supporters from around 50 districts of Uttar Pradesh have been mobilised for the show of strength at Ayodhya.

Top VHP leaders including its international vice-president Champat Rai are camping in the Ayodhya, overseeing arrangements for the 'Dharm Sabha'.

Samajwadi Party chief and former UP chief minister Akhilesh Yadav has said that the Army should be deployed in Ayodhya if need be, to maintain law and order and similar views were expressed by Uttar Pradesh Minister OP Rajbhar, who described the mass gathering of right-wing elements as "a failure of the government." Hitting out at Mr Yadav, former army chief and union minister VK Singh said, "I want to assure Akhilesh ji that he should not worry. Riots never happen when the BJP is in power. I'm quite sure the government being that of BJP, unlike other parties, will ensure that law and order is maintained.