Harsimrat Kaur Badal condemned Islamabad's insistence to charge the fee and said the external affairs ministry has taken up the issue with the Pakistan government. 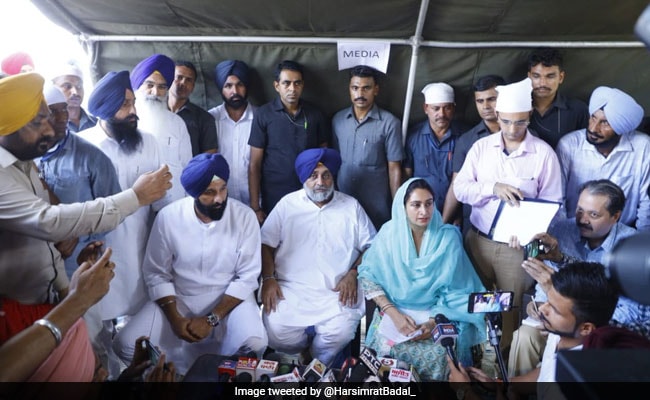 The ICP is being set up in a 50-acre area and will have a 300 feet flag at its entrance.

Union minister Harsimrat Kaur Badal on Saturday condemned Islamabad's insistence to charge a service fee of USD 20 from pilgrims to the Kartarpur Sahib Gurdwara and compared it with ''jaziya''.

The charge is condemnable and akin to the imposition of ''jaziya'', said the Union minister, who was on a visit to the upcoming Integrated Check Post (ICP) facility, which is to be ready by October 31.

Ms Badal condemned Islamabad's insistence to charge the fee when asked about it by reporters and said the external affairs ministry has taken up the issue with the Pakistan government.

''Jaziya'' or ''Jizya'' implies a per capita yearly taxation historically levied in the form of financial charge on permanent non-Muslim subjects of a state governed by Islamic law to fund public expenditures of the state.

My visit to ICP facility with Sukhbir ji and Bikram was rewarding. Land Port Authority officials filled us in on details of the work, which is being done in record time. I suggested multi-media screens be put up in waiting area showcasing life & teachings of Guru Nanak Dev ji./2 pic.twitter.com/j6spRLXNIi

She visited the upcoming ICP facility along with Shiromani Akali Dal president and her husband Sukhbir Singh Badal and reviewed the work.

Harsimrat Kaur, Sukhbir Singh Badal and former minister Bikram Singh Majithia were also given a presentation on the ongoing work of the ICP including the Passenger Terminal Building (PTB) being built by the Land Port Authority of India.

The ICP is being set up in a fifty acre area and will have a 300 feet flag at its entrance.

It will also have three lotus petal shaped blocks which will include the security area, food court and waiting area. The passenger terminal will have 54 immigration counters and the complex will also have a tower restaurant which will also serve as a view point minaret.

Expressing satisfaction at the ongoing work, the Union minister also suggested that multi-media screens be put up in the waiting area to showcase the life and teachings of Guru Nanak Dev.

Bathinda MP thanked "the almighty for listening to the countless prayers of the Sikh community to have ''darshan'' of Kartarpur Sahib in Pakistan".

She said the ''sangat'' was also thankful to Prime Minister Narendra Modi for fulfilling a 70-year-old demand of the community.

She said the work on the ICP as well as the approaching four-lane road and bridge was being completed in record time.

She said she was assured by the Land Port Authority of India that the ICP would be completed by October 31.

The corridor will connect Darbar Sahib in Pakistan''s Kartarpur with Dera Baba Nanak shrine in Gurdaspur district in Punjab and facilitate visa-free movement of Indian pilgrims, who will have to just obtain a permit to visit Kartarpur Sahib.

The Union Cabinet on November 22 last year had decided to develop a passage from Dera Baba Nanak in Gurdaspur to the the Indian side of the international border.

The Kartarpur gurdwara is located in Pakistan''s Narowal district across the Ravi, about four kilometres from the Dera Baba Nanak shrine in Indian Punjab.

The corridor will be thrown open to pilgrims in November this year to mark the 550th birth anniversary of Guru Nanak Dev.