Giriraj Singh shared stage with Manju Verma, released on bail by Patna High Court on March 12, at an event in Begusarai where he was addressing NDA leaders and party workers. 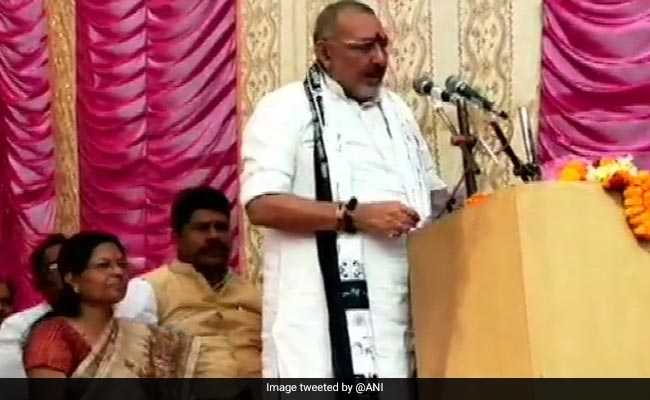 Giriraj Singh was seen at an event in Begusarai.

Mr Singh shared stage with Manju Verma, released on bail by Patna High Court on March 12, at an event in Begusarai where he was addressing leaders of National Democratic Alliance (NDA).

The BJP minister has been fielded by the party from Begusarai, the parliamentary seat where former student leader Kanhaiya Kumar - backed by the CPI-M - will be making his electoral debut.

The Union Minister, who earlier said he was upset over the party's decision to field him from Begusarai and not Nawada where he won in 2014, sharpened his attack on Kanhaiya Kumar.

Without naming Kanhaiya Kumar, Mr Singh said his fight is not against an individual but "anti-nationals". "I have come to Begusarai to defeat the traitor... Anti-nationals are dreaming to win the election from Begusarai," he was quoted as saying by news agency ANI.

Manju Verma, a legislator from Cheria Bariyarpur, was seen smiling when Mr Singh took a jibe at Congress chief Rahul Gandhi and her mother Sonia Gandhi, saying that the two top Congress leaders "are out on bail".

Manju Verma was sent to Begusarai jail in November last year after the recovery of 50 live cartridges from her home at Arjun Tola village in the Muzaffarpur shelter abuse case.

Suspended from the JD(U) last year, Manju Verma's recent visit to Nitish Kumar's home prompted attacks from the Tejashwi Yadav's RJD and the Congress. "The Chief Minister has always adopted a holier than thou attitude with regard to corruption cases against leaders of our party. Now he should explain his respect for a person undergoing trial in a serious case," RJD national vice president Raghuvansh Prasad Singh said.

Over 30 girls were sexually assaulted at a shelter home in Muzaffarpur in Bihar. The allegations surfaced last year, leading to a CBI probe. Manju Verma stepped down as the social welfare minister after allegations of close links between her husband and Brajesh Thakur - the prime accused in the Muzaffarpur shelter home scandal.