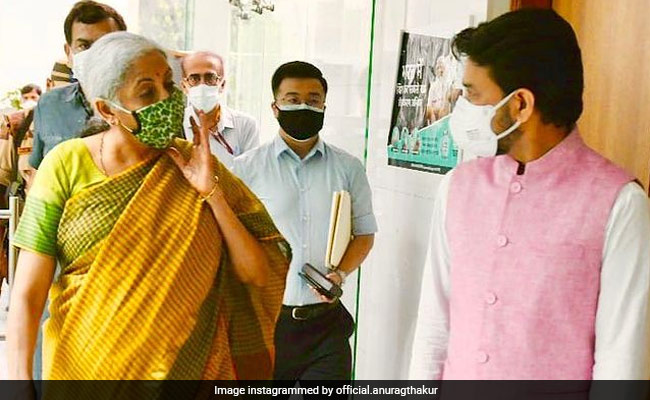 As Finance Minister Nirmala Sitharaman today announced key government decisions today, she teamed up with her former junior minister Anurag Thakur for the first time since his promotion in a recent cabinet reshuffle.

Anurag Thakur, who was Minister of State for Finance, was elevated to cabinet rank and given charge of the Information and Broadcasting and the sports ministries in the revamp of July 7. He shared a photo on Instagram of the two of them walking to the news briefing.

"Today's Cabinet announcements press conference was held with Hon. FM Nirmala Sitharaman Ji. Reminded of the time we did the Aatmanirbhar Bharat Package announcements together," Mr Thakur wrote, with the hashtag #Memories.

Nirmala Sitharaman and Mr Thakur jointly announced a series of decisions as part of the government's Atmanirbhar Bharat financial relief package amid the COVID-19 pandemic.

As the two addressing the media, Ms Sitharaman made the announcement in English and Mr Thakur shared the Hindi version. Flanked by finance ministry officials, they both took turns responding to questions.

Today, Ms Sitharaman announced that bank depositors would receive Rs 5 lakh as insurance on their deposits within 90 days if the RBI imposed moratoriums on banks.

The proposed law provides insurance to all bank deposits and covers commercial banks and even foreign branches in India, Ms Sitharaman told reporters.

Mr Thakur was seen to be one of the big gainers in the cabinet shuffle, Prime Minister Narendra Modi's first since he took power for the second time in 2019. He was among seven Ministers of State to be promoted to cabinet rank.