"I Wasn't There, Neither Was My Son": Union Minister On UP Violence

A murder case has been filed against Union Minister Ajay Kumar Mishra's son Ashish Mishra after eight people, including four farmers, were killed during violence in Lakhimpur Kheri in Uttar Pradesh. 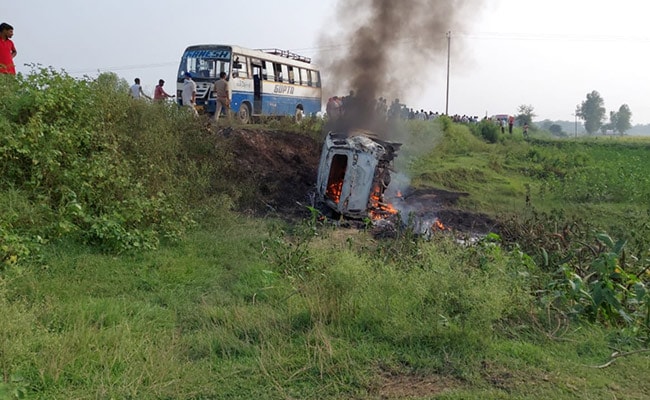 Farmers claimed violence broke out after a car in the minister's convoy ran over protesters. (File)

Union Minister Ajay Kumar Mishra today insisted that neither he nor his son were present at Lakhimpur Kheri district in Uttar Pradesh yesterday when eight, including four farmers, were run over during protests against his visit.

A murder case has been filed against Mr Mishra's son Ashish Mishra. Protesters allege that he was driving the car that ran over farmers at Lakhimpur Kheri.

The group of protesting farmers had gathered to block the Union Minister and Deputy Chief Minister Keshav Prasad Maurya from visiting the area as they were upset over a recent speech by Mr Mishra. The two ministers were on their way to an event nearby.

Later, Mr Mishra, the Union Minister of State for Home, denied his son had anything to do with the deaths. When he was asked to comment on a video that showed his son waving a gun at the protest site, he said the weapon "must be" licensed.

"If my son had a revolver, it would have been licensed. I was not there, neither was my son," Mr Mishra told reporters, blaming the violence on a "Khalistani hand".

He also said neither he nor his son had been questioned by the Uttar Pradesh police. "We are not aware of any FIR. People who filed the FIR know that neither me nor my son were at the site. We were three-four km away at a programme. There were miscreants who attacked workers with sticks and swords. You saw the way they were beating up people. If my son had been there, he would not have survived," Mr Mishra said.

"My son was present at the Deputy Chief Minister's event all through and I was with Mr Maurya too," he added.

The Minister's defence came as the farmer deaths quickly snowballed into a massive political fight, months before the UP election.

The Congress said Priyanka Gandhi Vadra was arrested late last night by policemen who stopped her convoy at Sitapur, on its way to Lakhimpur Kheri.