Field Level Officer of Dispur, National Register of Citizens Sewa Kendra, Syed Shahjahan was caught red handed by a team of Anti-Corruption Bureau while accepting a bribe of Rs 10,000 from a woman.

Syed Shahjahan, 48, was then caught red-handed accepting a bribe.

The Assam police has arrested two National Register of Citizens (NRC) officials on charges of accepting bribe to include names in the NRC draft.

According to police sources, field level officer of the NRC help centre of Dispur 8 at Ganeshguri, Guwahati, Syed Shahjahan allegedly demanded a bribe of Rs 10,000 from a woman, identified as Kajari Ghosh Dutta living in Guwahati, to correct some technical errors in her NRC application to be included in the citizenship list.

However, Ms Dutta approached the Assam Anti-Corruption Bureau in the Directorate of Vigilance and Anti Corruption and filed a complaint.

She was expected to pay the bribe amount on Thursday, and a trap was laid down by the officials.

Syed Shahjahan, 48, was then caught red-handed around 11 am on Thursday while accepting the bribe.

Ms Dutta, a resident of Ananda Nagar area of the city, had filed another First Information Report against the Assistant Local Registrar of Citizen Registration Rahul Parashar of the same NRC help centre. The 27-year-old too was arrested for his alleged complicity with the other official. 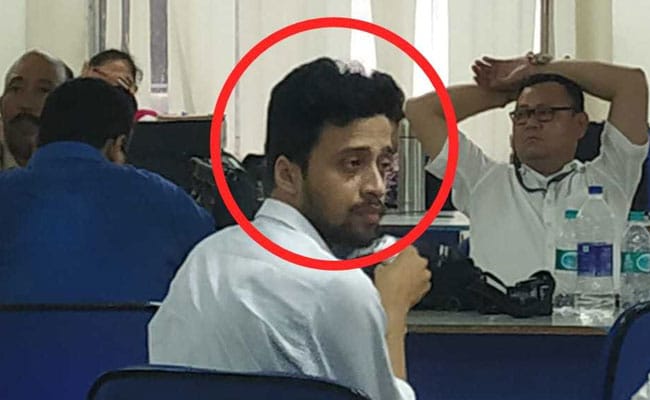 Rahul Parashar, another NRC official, was arrested for his alleged complicity with the other official.

The bribe amount and some documents were seized by the Anti-Corruption Bureau from the office of the NRC Sewa Kendra.

The NRC exercise is aimed at identifying illegal immigrants in the state that borders Bangladesh. When the draft NRC was published on July 30, 2018, there was a huge controversy over the exclusion of 40.7 lakh people from it. The draft NRC included the names of 2.9 crore people out of the total 3.29 crore applications.

The final NRC, a list of Assam's residents, will be published on July 31.

A person whose name is not part of the NRC, currently being updated in Assam, can approach any such tribunal with a certified copy of the rejection order received from the NRC authorities along with the grounds for appeal.