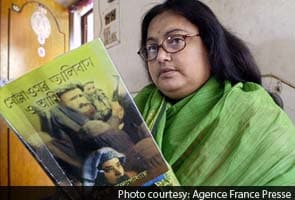 Kabul: The Afghan police arrested two militants on Monday in the execution-style murder of an Indian writer who had written critically about the Taliban, in a memoir that was later made into a Bollywood movie.

Afghan officials said the two insurgents had confessed to being part of the Haqqani Network, a Taliban affiliate, and to having killed the writer, Sushmita Banerjee, on Thursday. Armed men abducted her from her home in eastern Paktika province, where she lived with her Afghan husband, took her to a Taliban safe house and shot her 25 times, local officials said.

Dawolat Khan Zadran, the police chief of Paktika province, quoted the two suspects, Mohammad Yaqub and Mohammad Asif, both about 28 years old, as saying that they had killed her because she had written about the Taliban, and because "she had installed some Internet connections in her house, and they had to kill this woman for that."

He said that local villagers had led the police to the men, who were captured along with weapons and a barrel of explosive materials in the Sarrai Kala village in Paktika.

Mrs Banerjee, who grew up in a Hindu family in India, converted to Islam when she married her Afghan husband and was known as Sahib Kamala in Afghanistan. She was also known as Sushmita Bandopadhyay in India. Her first book, "Kabuliwala's Bengali Wife," recounts how she was whipped by the Taliban for refusing to wear a burqa; the book was later made into a Bollywood movie, "Escape From Taliban," but Mrs Banerjee had complained that she received no compensation from the production.

Promoted
Listen to the latest songs, only on JioSaavn.com
In recent years, she had worked as a respected midwife in her husband's village.