The student of a local school, Sanghamitra Deb secured 77 per cent in her HSLC (high school leaving exams), which she sat for a year after she was married 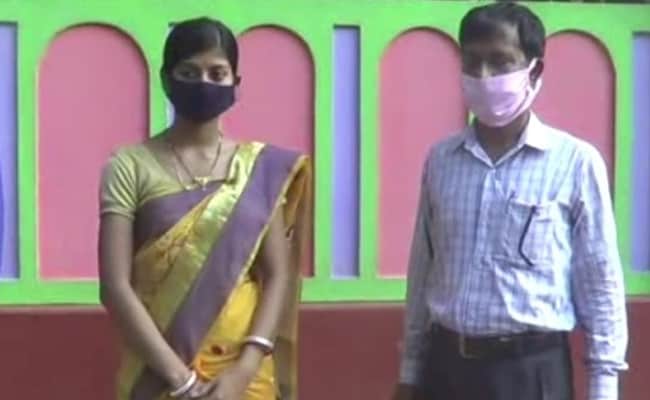 Sanghamitra Deb scored 77 per cent in her HSLC exams

A 19-year-old girl from Tripura, who was "married" at 15 and is mother to a two-and-a-half-year-old son, has not only passed her Class 12 exams but has secured a top rank.

Sanghamitra Deb was ranked in the top ten in results released by the Tripura Board of Secondary Education on Friday. A student of the Arts stream, she scored an incredible 92.6 per cent to finish ninth amongst students of all streams and seventh in her own.

Ms Deb lives with in-laws in the northeastern state's Gandhigram town, which is located around 10 km from state capital Agartala. Her husband, Raju Ghosh, is a BSF (Border Security Force) soldier stationed in Kashmir.

"I studied (in) the time I got after managing household chores and taking care of my child. My in-laws helped of course. I am very happy with the results. Now I wish to complete graduations too in this manner," an elated Ms Deb, the daughter of a farmer in the same region, said.

The student of a local school, she secured 77 per cent in her HSLC (high school leaving exams), which she sat for a year after she was married.

Ms Deb's academic success does not, however, mask widespread concern over child marriages, which remain a serious and perennial problem in rural parts of the state.

According to a report by Young Lives, an agency that studies childhood poverty, data from the National Health and Family Survey indicates Tripura ranks second in terms of child marriages in India; around 21.6 per cent of all marriages here involve those between the age of 15 and 19.

The national average is 11.9 per cent, a statistic that is as concerning.