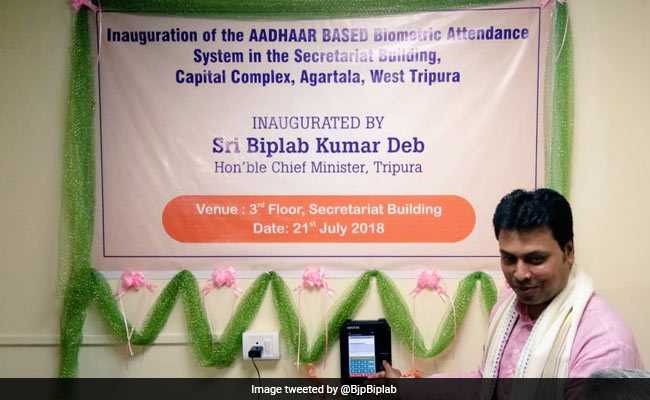 Tripura Chief Minister Biplab Deb at the inauguration of the new attendance system.

The Tripura government has introduced Aadhaar based biometric attendance system at the state secretariat aiming to bring in more discipline among staff and encourage minimal use of paper for official work.

"We have 996 employees working in the state secretariat. All of them are very enthusiastic about the new system", the chief minister said.

He also said the central government pays huge sums to buy paper used in official work. Judicious use of the commodity can save a lot of money, he said.

The biometric attendance system would go a long way in curbing unnecessary use of paper, he said.

In an office memorandum issued by the Department of General Administration (Secretariat Administration) on July 16, Secretary TK Chakma said the state government has adopted a decision to give stress on importance of economic use of paper in government offices.

Mr Deb said attendance log books were things of the past as nobody needed to keep record of employees attending the office and store them in secure lockers, which makes the
entire process lengthy.

The new system will be robust, self-dependent and easy to use. Depending on others for attendance and other regular chores were done in old days. Now, everyone has to take responsibility, he added.