"BJP-ruled Gujarat has rejected the repressive rules, UP government should also stop harassment in the state," Akhilesh Yadav said. 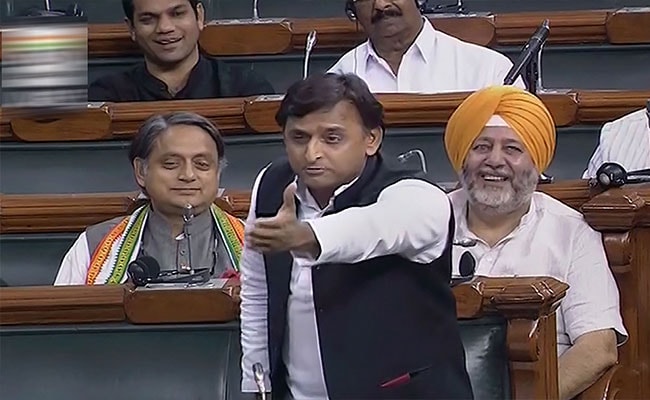 Slamming the Uttar Pradesh government over the death of a techie allegedly after an altercation with traffic police over suspected violation, Samajwadi Party chief Akhilesh Yadav on Wednesday demanded that it end the "harassment" of people by rejecting the "repressive rules" like other states.

"It is very saddening that due to traffic terrorism of the BJP government, in Noida a software engineer died due to heart attack during vehicle checking. I express my condolences for the grieved family," Akhilesh Yadav said in a tweet.

"BJP-ruled Gujarat has rejected the repressive rules, UP government should also stop harassment in the state," he added.

A Noida resident had alleged that his 35-year-old son died of heart attack at a hospital after an altercation with the traffic police over a suspected violation.

The Noida Police said the incident took place on September 8 evening in Ghaziabad and the traffic police personnel involved were from that district.

The man worked at a software company. He was a diabetic and was in his car with his elderly parents when the traffic policemen intercepted him for checking, according to officials.

The 65-year-old father of the man had alleged "misbehaviour by the traffic police" in the name of checking under the "stricter new Motor Vehicles Act".

"It wasn't a case of rash driving or anything. There were two elderly people sitting inside the car, yet they hit the car with batons... This is no way of checking. I don't think there's any rule that allows it," the father had said.

"The man in the white uniform who had come for inspection did not appear someone of a very high rank or someone authorized to check all these things," a video clip purportedly shows him saying.

Gautam Buddh Nagar Senior Superintendent of Police Vaibhav Krishna had, however, said, "After inquiry it came to light that the deceased was prima facie diabetic in nature and he died due to heart attack. The place of incident was near CISF Cut in district Ghaziabad. It happened at around 6 PM."

The Gujarat government on Tuesday announced a drastic cut in the newly introduced penalties for traffic violations under the amended Motor Vehicles Act.