Olympics 2020: Several videos showed the residents in Lovlina Borgohain's village in Golaghat district of Assam jumping on the streets and bursting crackers in excitement. 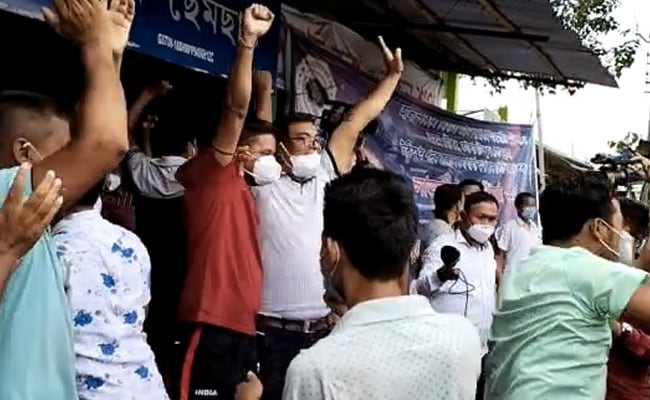 Residents in Lovlina Borgohain's Assam village were bursting into celebrations.

As soon as boxer Lovlina Borgohain, 23, won her quarter-final bout against Nien-Chin Chen of Chinese Taipei, assuring India of a second medal at the Tokyo Olympics, people in her hometown in Golaghat district of Assam came out on the streets to celebrate. They danced, clapped and cheered Ms Borgohain. Some of them beat dhols and sang traditional Assamese songs. And many of them recorded the moment on their mobile phones as TV crews jostled with the crowd to report the emphatic celebration.

Several videos, including by news agency ANI, showed the residents jumping and bursting crackers. After gathering on a street and forming a circle, they raised their hands and shouted, “Lovlina Borgohain Zindabad”. She is the first woman to qualify for the Olympics from Assam. She was awarded the Arjuna Award in 2020

#WATCH | Assam: Villagers and neighbours of boxer Lovlina Borgohain in Sarupathar, Golaghat were seen celebrating her victory in the Boxing, Women's Welterweight (64-69kg), Quarterfinal 2 in #TokyoOlympicspic.twitter.com/56WuNdp841

"We are very happy for her and are proud of her. We thank the people of Assam for the support. She will win the semi-finals and the finals," " her father Tiken Borgohain said in Assamese. He said that it was a tough match for her. "I am told she dominated the game, though I could not see the match. We are now hoping for the best."

The Olympian had spoken to her family before the match.

One video showed a group of people watching the quarter-final bout on a large screen inside a residence. Most of them had been offering their suggestions as to how Ms Borgohain should play the game. However, the moment she found an opening in her opponent's defence and punched her in the face, all the spectators cheered in excitement. At that moment, even before the results were announced, most people appeared assured of her win.

With her win, Lovlina Borgohain has become the only second Indian female boxer to clinch an Olympic medal -- the colour of which is yet to be decided. Overall, she would be the third Olympic medal winner after Vijender Singh (2008) and Mary Kom (2012).

Ms Borgohain defeated Nien-Chin Chen in the welterweight (64-69 kg) category. She won the game via a 4:1 split decision. She won the first round 3:2. She won the next round unanimously. In the final round, she secured a 4:1 win. In the semi-finals, she will compete against Turkey's Busenaz Surmeneli.