Toilet Complex Demolished In UP Amid "Jai Shri Ram" Chants

Videos shot on mobile phones by onlookers showed a group of men dismantling the urinals in the toilet complex. The clips are viral on social media. 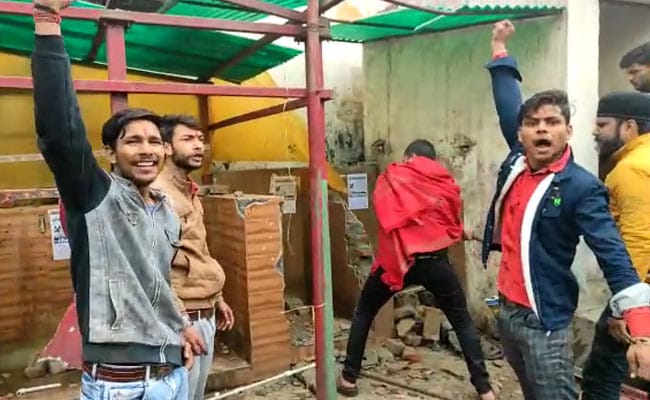 UP: The local police have registered a case and are investigating.

A recently renovated public toilet complex at the state-run bus station in western Uttar Pradesh's Saharanpur, around 700 kilometres from Lucknow, was on Wednesday demolished by right-wing activists, who were upset over the urinals being next to a temple.

Videos shot on mobile phones by onlookers showed a group of men dismantling the urinals in the toilet complex. The clips are viral on social media.

In one of the clips, a man in a yellow jacket stands and guides the others. Another video shows the men destroying the urinals and shouting "Jai Shri Ram". A third mobile phone clip shows a man with a hammer bringing down concrete blocks at the urinal as the others shout "ek hi naara ek hi naam (only one slogan, only one name), Jai Shri Ram, Jai Shri Ram".

A man, who identified himself as a member of the Akhil Bharat Hindu Mahasabha, spoke to the media on why the urinals were demolished. "Some of our colleagues had come here two days ago and asked that the bathrooms be removed from here. You can see this temple; it is 100 years old. People are urinating on the temple walls. We had given an ultimatum but nothing happened. So we took the matter into our own hands," he said.

Bimla, the caretaker of the toilet complex, however, said the urinals had been there for decades, and no one objected to their presence near the temple ever.

"This is a 40-year-old toilet complex, no one complained about this earlier. This had been repaired recently. I told them if you are looking at this toilet then look at these overflowing drains here and do something about this too. They told me the drains were the responsibility of those running the bus station. There are so many people (at the station), they will urinate somewhere right? Now they will go in the open. Is that fine? The toilet complex is at a distance from the temple, there is a drain in between, what is the problem?" she said.

The local police have registered a case and are investigating.

"We have found videos of the demolition. It is difficult for me to accuse anyone at this stage. We will collect proof and update you. The toilet has been at the same spot for a lot of time, it was recently renovated," Vineet Bhatnagar, a senior police official in Saharanpur, told the media.