Karnataka and Goa, the riparian states of the Mahadayi (known as Mandovi in Goa), have been locked in a bitter battle over the sharing of water of the river, which originates in Belagavi in Karnataka. 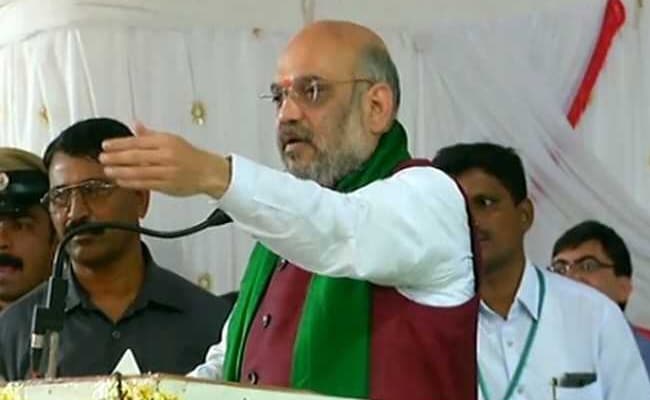 During Karnataka election campaign, Amit Shah had given assurance to resolve the dispute. (File)

Panaji: The BJP in Goa today expressed confidence that party chief Amit Shah would be able to resolve the logjam between Karnataka and Goa over diversion of the Mahadayi River water.

Karnataka and Goa, the riparian states of the Mahadayi (known as Mandovi in Goa), have been locked in a bitter battle over the sharing of water of the river, which originates in Belagavi in Karnataka.

The matter is pending before the Mahadayi Water Dispute Tribunal.

The Goa BJP unit president, Vinay Tendulkar, said he is hopeful that a solution to the issue would be worked out soon.

"We have full faith that our party president Amit Shah will resolve the problem," Mr Tendulkar told reporters in Panaji.

"We also have faith in the inter-state water dispute tribunal too. We are waiting for the tribunal's order on the issue," he said.

Mr Shah, during his election campaign rally in Karnataka, had earlier given an assurance on resolving the Mahadayi water dispute issue, if the BJP comes to power in the state.

Mr Tendulkar said that while Goa has agreed for a solution, his party's stand on opposing diversion of the river water will remain unchanged.

Goa Chief Minister Manohar Parrikar had earlier said his state could share the river water with Karnataka for drinking purposes and expressed his willingness for bilateral talks.

However, the BJP's ally Goa Forward Party had said it will not allow the diversion of water at any cost.

Last year, the Supreme Court had ordered Karnataka to stop the work on the construction of the canal, which was aimed at diverting water from the Mahadayi tributary.

Promoted
Listen to the latest songs, only on JioSaavn.com
Goa had claimed that it has photographic evidence to support its claim that the work has begun. However, Karnataka had rejected the claim saying there was no such activity.

The Goa government last month told the tribunal that the Mahadayi river water demand by neighbouring Karnataka is actually for irrigating its sugarcane crop areas.