Ahead of Lok Sabha polls in April-May last year, Amar Singh had famously lashed out at former colleague Azam Khan, calling him the "filth and muck" of Indian politics 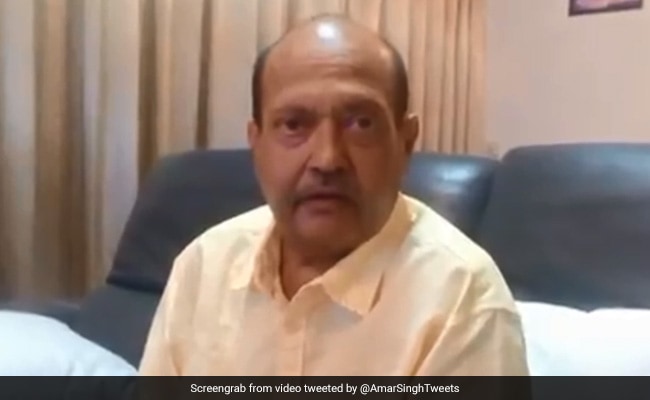 Former Samajwadi Party leader Amar Singh today shot down rumours of his death, revealing that he is, in fact, in a Singapore hospital awaiting surgery for a kidney-related illness. In a video posted on Twitter, dramatically titled "Tiger Zinda Hai", a visibly frail Mr Singh took a swipe at "well-wishers" who, he claimed, wanted him dead, saying he would return to India as soon as his scheduled medical procedure was completed.

Amar Singh's video statement came a day after rumours on social media that the 64-year-old political leader, who was born in Uttar Pradesh's Azamgarh, had died.

"My well-wishers and friends are spreading rumours of my death... that Yamraj (the Lord of Death in Hindu mythology) has called me to him. This is absolutely false. There is enough courage, enthusiasm and spirit left in me and my treatment is underway. Hopefully, with Goddess Bhavani's blessings, I will return with double energy," Amar Singh said in the video.

"I thank all my well-wishers who are spreading the news of my death," the former Rajya Sabha MP added.

Ahead of Lok Sabha polls in April-May last year, Amar Singh had famously lashed out at former colleague Azam Khan, calling him the "filth and muck" of Indian politics.

The attack came after Azam Khan made a distasteful remark about "khaki underwear" while campaigning against actress-turned-politician and current BJP leader Jaya Prada in Uttar Pradesh's Rampur.

Azam Khan has been sparring with Jaya Prada ever since she joined the BJP in March last year. She had won from Uttar Pradesh's Rampur on a Samajwadi Party ticket in the 2004 and 2009 Lok Sabha elections. However, both she and Mr Singh were expelled in 2010 over alleged anti-party activities.

A year after they were expelled Jaya Prada spoke out in defence of Amar Singh, who was accused in a cash-for-votes scandal ahead of a trust vote in parliament in 2008.

Amar Singh was a key leader in the Samajwadi Party at a time when the party moved to support the Congress-led UPA government in 2008 after the Communist Party of India withdrew from the government over the nuclear deal with the United States.

In 2010 Mr Singh set up his own party - the Rashtriya Lok Manch - the following year and contested 360 of the 403 seats in UP Assembly polls, but failed to win any.

Three years later he joined the Rashtriya Lok Dal and fought the Lok Sabha elections from the Fatehpur Sikri seat. However, he lost that electoral fight too.