'Tiger Widows' Of Sundarbans Spin Khadi To Eke Out Living

The Khadi Commission, which had set up a temporary structure three years ago, has now replaced it with a permanent work shed and common facility in Sundarban's Bali Island. 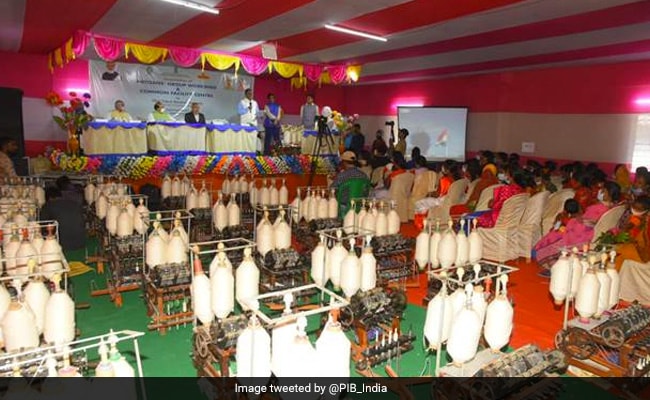 Sundarbans: The Khadi Commission has also provided the artisans with machines for yarn dyeing.

More than 100 'tiger widows' of Bali Island in Sundarbans of West Bengal, who were facing an acute financial crisis after the death of their husbands in tiger attacks, are spinning khadi to eke out a living.

The initiative of the Khadi and Village Industries Commission (KVIC) since 2018 has borne fruit as the remote island, which was totally disconnected from the mainstream of development since Independence, now bustles with activity with the sound of spinning of power loom and charkha breaking silence in the area.

The women have now picked up the skill to independently eke out a living with marketing support from the commission, its release said on Friday.

KVIC, which had set up a temporary structure three years ago, now replaced it with a permanent 3,000 sq ft work shed and 500 sq ft common facility for the artisans in Bali Island. These were recently inaugurated by the commission's chairman Vinai Kumar Saxena. Christened the 'Tiger Victim Khadi Katai Kendra', it is now equipped with 125 new model charkhas, 15 modern looms and provides employment to 150 women artisans on the island, it said.

KVIC has also provided these artisans with machines for yarn dyeing and manufacturing readymade garments.

The centre has been modernised at a cost of Rs 95 lakh, funded by KVIC under its Khadi Reforms and Development Programme (KRDP) and Workshed Scheme for Khadi Artisans, it said.

The centre is being locally managed by a khadi institution from the state.

"While the self-employment activities will help rehabilitate these hapless women artisans, it will also encourage other families to take up spinning and weaving activities to earn a livelihood.

"By taking up khadi activities, these artisans will be able to earn up to Rs 200 per day. The idea is also to desist these families from venturing into deep water or thick mangroves for fishing and thus mitigate the threat of tiger attacks," Mr Saxena said.

KVIC had initially provided 75 charkhas to the women artisans in 2018. It had also provided 500 bee boxes with bee colonies to the economically backward people of the island.