The BJP had swept all the 10 Lok Sabha seats in Haryana in the recently held general elections. 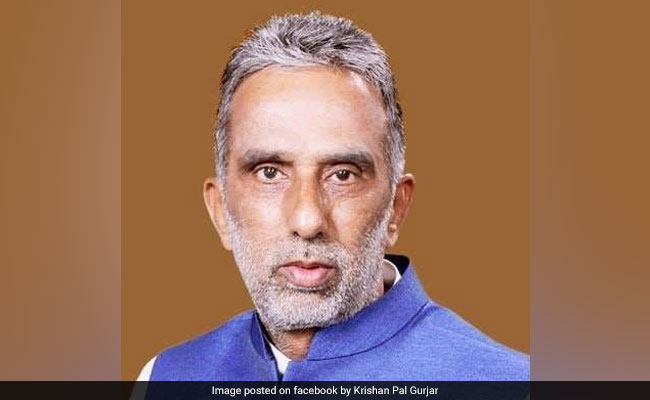 Rao Inderjit Singh and Krishan Pal Gurjar were among the three MPs from Haryana who found their place in the council of ministers in the new Modi government.

The BJP had swept all the 10 Lok Sabha seats in Haryana in the recently held general elections.

While Rao Inderjit Singh was sworn-in as the minister of state (independent charge), Mr Gurjar and BJP's Dalit face in Haryana Kataria will be ministers of state.

The BJP candidates had decimated the opponents in Haryana in the elections, guiding the party to its best ever performance in the state, where it had been playing second fiddle role until 2014.

After winning seven of the eight seats in the 2014 Lok Sabha polls, the BJP later that year went on to form the government on its own for the first time in the state. The party''s graph has been on the rise ever since.

In the previous Modi government, too, Haryana had three ministerial berths. Apart from Rao Inderjit Singh and Mr Gurjar, Birender Singh was the minister. Birender's bureaucrat-turned-politician son Brijendra had entered the fray this time and won from Hisar.

Rao Inderjit Singh has dominated south Haryana politics for decades and is now the BJP's face from that region.

Having been elected as the Lok Sabha MP for the fifth term now, of which second term as a BJP member, he, over the years, has enjoyed unflinching support of the Yadav community, also known as Ahirs.

Mr Yadav is a former six-time MLA from Rewari.

Rao Inderjit Singh has cultivated his image as a ''no-nonsense'' person and during his stint as the BJP MP, the Gurugram parliamentary constituency saw many developmental projects coming to the region.

A former Congress leader, he joined the BJP months before the 2014 Lok Sabha polls.

Rao Inderjit Singh believes the mantra of his and his party's success is good governance, development and trust.

"The expectations of people are high and we will work hard to live up to these," he said.

Mr Gurjar came into limelight with his debut in the Lok Sabha polls in 2014 when he trounced his Congress rival and four-time MP Avtar Singh Bhadana.

The 61-year-old leader defeated Bhadana again in this general election by a margin of over six lakh votes.

Mr Gurjar, who has also remained a three-time MLA from Tigaon in Faridabad, was the BJP's face in Haryana, when the party was in opposition till the 2014 assembly polls.

He served as the transport minister of Haryana between 1996-99 in the Bansi Lal-led government, of which the BJP was an ally.

When the Modi government came to power in 2014, he was made the minister of state for Road Transport and Highways and Shipping.

Later, he became the minister of state for Social Justice and Empowerment.

Mr Kataria, 67, has come a long way in politics.

He retained the Ambala reserved constituency seat defeating former Union minister and Congress veteran Kumari Selja by a margin of 3,42,345 votes to enter Lok Sabha for the third time.

He was the spokesperson of the Haryana BJP in early 1980s and served as party''s state unit president between 2001-03.

Mr Kataria, who holds a post-graduate degree in law, was also elected as MLA from the state in 1987 and became MP for the first time in 1999.

He lost the subsequent elections in 2004 and 2009 to Selja before tasting victory from Ambala Lok Sabha segment again in 2014.

Known for his penchant for penning short poems, Kataria has mostly maintained a low-profile in politics.