With all public transport stopped, many left without food, shelter and income had been forced to undertake journeys for hundreds of kilometres on foot

Amid the chaos, fear and uncertainty spreading across the country because of the COVID-19 outbreak, a distressing narrative emerged from Delhi on Saturday, when thousands of migrant workers, left without jobs, shelter or money after Prime Minister Narendra Modi's 21-day nationwide lockdown, crowded into bus terminals around the national capital trying desperately to return to hometowns and villages across the border in Uttar Pradesh.

The centre's "total lockdown", meant to halt the spread of a highly infectious novel coronavirus that transmits rapidly in crowded spaces, had suspended all interstate bus and railway services, leaving migrants and their young families no option but to walk hundreds of kilometres foot in searing heat.

As harrowing stories of men, women and infants undertaking the punishing trek emerged over the past few days, the Uttar Pradesh and Delhi governments responded Saturday by arranging buses to ferry the people home; the UP government said it had organised 1,000 buses and Delhi Chief Minister Arvind Kejriwal said 200 DTC buses would also be pressed into service.

On Saturday evening, as the fourth day of the lockdown comes to a close, the sheer scale of the exodus was highlighted in videos shared by news agency ANI and Congress leader Rahul Gandhi,

#WATCH Huge number of migrant workers at Delhi's Anand Vihar bus terminal, to board buses to their respective home towns and villages; Police is present at the spot pic.twitter.com/jHYbgIXOk3

In the ANI video a massive crowd of men and women, some with face masks and others with handkerchiefs around their noses to protect them from the COVID-19 threat, can been huddled together in queues waiting to board buses at Delhi's Anand Vihar Interstate Bus Terminal.

Delhi Police officers, also wearing masks, can be seen carrying lathis and loudspeakers as they attempt to organise the mass of people. One officer, careful to keep a safe distance between himself and the crowd, waves at a man with a lathi as he tries to control the queue.

"I am a daily wage labourer. There is no work available right now. What else are we supposed to do? No arrangements made by the government have reached us. We are going to our village. If we stay here, we will starve to death," a migrant worker was quoted by ANI. 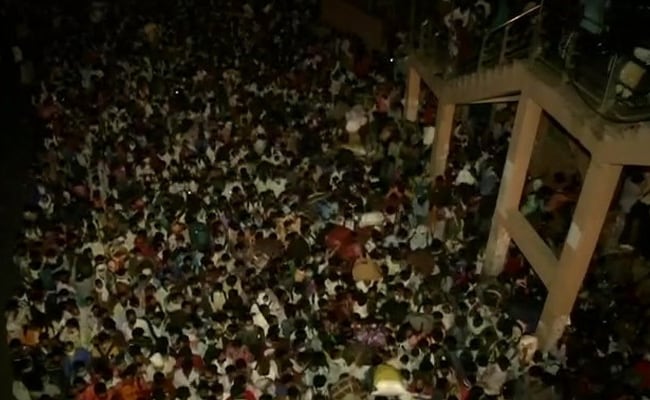 An enormous crowd was also witnessed at Ghazipur, near the border with UP, where people were waiting to board the buses arranged by Chief Minister Yogi Adityanath's government.

In it tens of thousands of migrants can be seen crowding around a handful of Delhi Transport Corporation (DTC) buses. As the video pans to show either side of a pedestrian bridge linking to a nearby metro station, the crowd stretches as far as the eye can see. 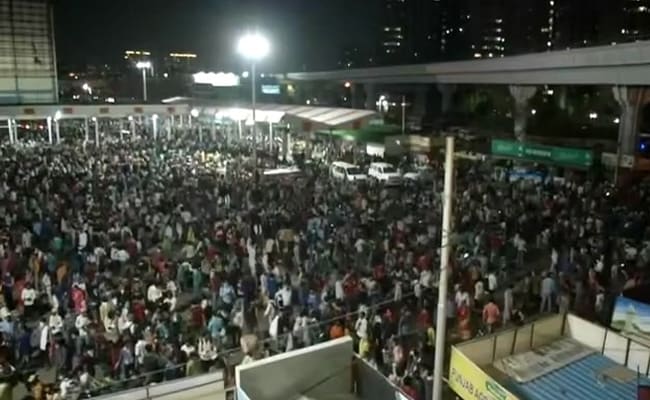 A solitary Delhi Police patrol car can be seen on one side of the bridge with around a dozen police officers gathered around. A cacophony of car horns and sirens can be heard in the background as a never-ending line of masked men carrying bags and suitcases shuffle past.

"Out of work and facing an uncertain future, millions of our brothers and sisters are struggling to find their way back home. It is shameful we have allowed any Indian citizen to be treated this way and the government has no contingency plans for this exodus," Mr Gandhi said in his post.

Mr Gandhi had tweeted earlier in the day as well, tweeting: "The government is responsible for this terrible condition. Bringing citizens to such a state is a very big crime".

Congress General Secretary Priyanka Gandhi Vadra also tweeted on Saturday evening urging the government to help the gathered migrants. In an earlier video tweet she had reminded the centre that it had sent jumbo jets to bring back Indians stranded abroad.

Home Minister Amit Shah said the centre was committed to supporting migrant workers and that state governments had been urged to utilise their respective disaster response funds for relief measures and set up relief camps along highways and ensure the mass of migrants did not cross borders.

However, he cautioned governments to build these camps keeping social distancing in mind to avoid the virus spreading. Arvind Kejriwal and his deputy, Manish Sisodia, made the same plea, pointing out that the ruling Aam Aadmi Party (AAP) in Delhi had promised lunch and dinner for four lakh people.

"This (the lockdown) is the only way to control the spread of the virus," Mr Kejriwal said, echoing comments made by Prime Minister Modi. 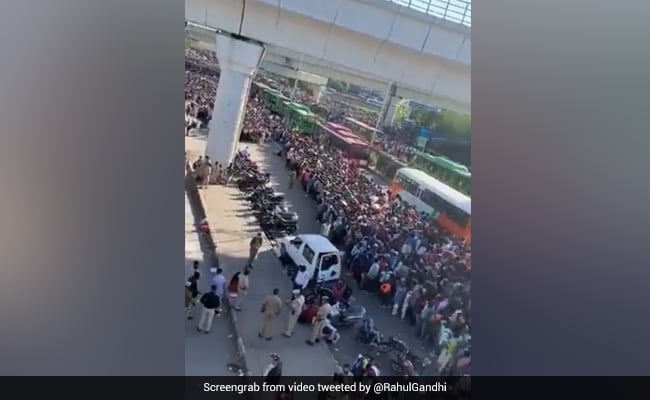 Meanwhile, it isn't just the UP government that is concerned for migrant workers from its state.

Bihar's Nitish Kumar, Bengal's Mamata Banerjee and Odisha's Naveen Patnaik have all written to their counterparts asking for help in ensuring safety of people from their respective states stuck in others.

There are more than 900 active COVID-19 cases in the country and, as per data from the Health Ministry, at least 19 deaths have been linked to the virus.

Worldwide over five lakh people have been infected and more than 23,000 killed by a viral attack that has long since passed the death toll of the dreaded SARS outbreak that killed 774 people.