Many Twitter users expressed outrage at the callous assessment of a joint family. 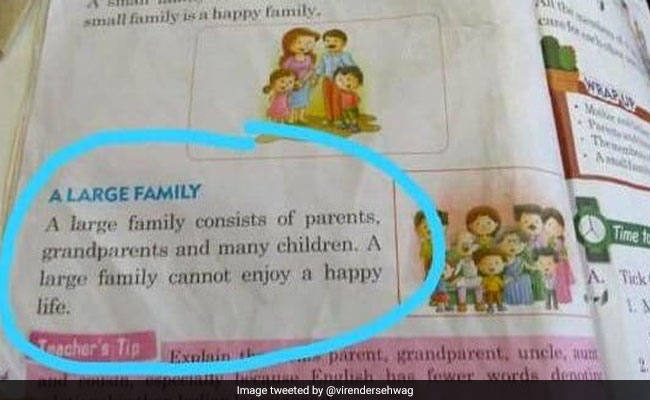 Virender Sehwag, the former cricketer with a sizeable fan-following on social media because of his outspoken comments, used Twitter to call out a school textbook.

In the tweet posted on Sunday, Mr Sehwag attached a picture of a page from a school textbook and used the word "crap" to describe a section that said "a large family cannot enjoy a happy life".

A lot of such crap in school textbooks. Clearly the authorities deciding and reviewing content not doing their homework pic.twitter.com/ftaMRupJdx

The tweet set off a flurry of reactions, and similar examples.

"Whosoever has finalized this curriculum hasn't done his homework! @PrakashJavdekar ji @PMOIndia sir if this is true kindly have a look!" said a tweet that sought to draw the attention of Prime Minister Narendra Modi and Education Minister Prakash Javadekar.

One post said: "Schools have to be educated first before children!!"

Many expressed outrage at the callous assessment of a joint family.

Sirjee... this is in my kid's text book! pic.twitter.com/jJAPLH5rHV

Wrong. School books should not attempt to indoctrinate children in such ways as to label grandparents as mere caretakers, or mothers as incapable, and so on.

Though Mr Sehwag usually tweets on cricket or cricketers, this is not the first time he has ventured outside his subject and commented on something completely different.