The horror behind the Games 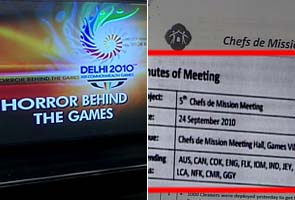 New Delhi: It's not just scams that are coming out like a can of worms, now horror stories are emerging of what went on behind the Games.

Documents accessed by NDTV indicate that several participating countries raised questions about building defects and safety inside the village.

The government's own bail-out package to Emaar worth Rs 700 crore could also be probed, all this came on a day when the government accused the company of failing to deliver and confiscated the bank guarantee of Rs 183 crore that it had deposited with the DDA. (Read: CWG - Govt freezes EMAAR's Rs. 183 cr deposit)

For its part, Emaar MGF says it handed over the village in good condition, the mess was caused by other agencies.(Read: Urine & vandalism in Village, warned EMAAR)

Let's take a closer look at some of the complaints made by the chefs de mission about the defects in the Games Village:

September 23:
Complaint: Cracks in the buildings, shattered glasses in residential area.
Difficult to believe it's been certified as fit.
Third party audit sought

September 24:
Canada: Piece of dry wall/concrete fell off at our Tower's main entrance
This is "potentially fatal"

NDTV has accessed minutes of several Organising Committee (OC) meetings which reveal the daily record of complaints and objections filed by chefs de mission of different contingents participating in the Games.