Congress President Polls: It is understood that accepting orders will be the remit of Mallikarjun Kharge, who is near certain to be elected. 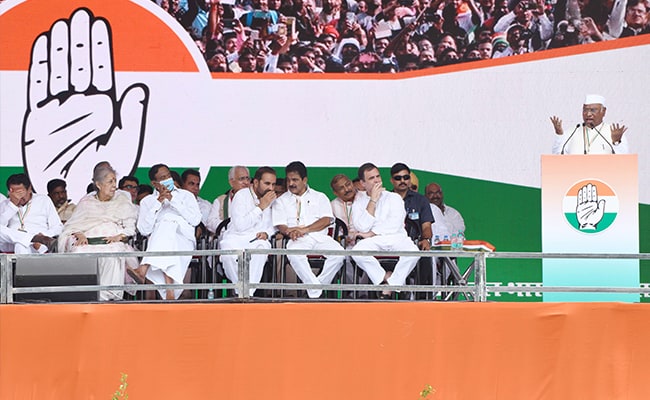 A day after announcing that he will run for Congress President, Digvijaya Singh on friday announced that he's dropping out. That decision is based on Mallikarjun Kharge being put forward as the candidate backed by the Gandhis.

"Kharge ji is my leader and my senior. I asked him yesterday if he wanted to contest. He said no. I met him again today. I told him I am with you fully if you are contesting. I can't think of contesting against him. He is filing his nomination and I will be his proposer," said Digvijaya Singh, 75.

Digvijaya Singh had not met Sonia Gandhi, the current Congress boss, before he announced his decision to run for her job. That was not a snub or an act of defiance, a la Ashok Gehlot. Instead, sources have explained, Digvijaya Singh was aware all along that his role was to serve as a 'dummy candidate' till the Gandhis decided on their choice.

Their initial vote went to Ashok Gehlot, the Chief Minister of Rajasthan. But the proposal - Mr Gehlot was urged on multiple occasions to contest the election including by Sonia Gandhi - blew up when Mr Gehlot was categorically told that in serving as President, he would have to give up his job as Chief Minister of Rajasthan. For the Gandhis, this was a quick-fix solution to a long-running problem in the desert state: Sachin Pilot, 45, is owed a shot at Chief Minister, which was promised to him when the party won the state in 2018. By moving Ashok Gehlot to Delhi, the Gandhis would have a trusted aide as the party boss and install Sachin Pilot as the head of the Rajasthan government. Two birds with one stone.

Except Ashok Gehlot refused to play ball. So in Jaipur, 92 MLAs threatened to resign in a show of support for him. Their condition was clear: under no circumstances could Sachin Pilot be made Chief Minister. Ashok Gehlot wanted to pick his replacement and there was no way Sachin Pilot was making even the long list.

The Gandhis were confronted with a double-fisted punch: a public revolt by a senior and trusted loyalist and the prospect of a shaky government in one of the few states that the Congress still governs.

Last evening, Ashok Gehlot met with Sonia Gandhi and emerged remorseful. He said he had apologized to her, taking 'moral responsibility' for the 'indiscipline' of the Congress MLAs in Rajasthan, that he would not run as President, and that Sonia Gandhi alone will decide if he will continue as Chief Minister. The comments provided a face-saver to the "High Command".

On friday, Ashok Gehlot reiterated his devotion to the Congress' central leadership and said he would be among those who propose the name of Mallikarjun Kharge for President. More salve to ease the slow burn inflicted by him.

Shashi Tharoor, undaunted by the fact that his opponent has the endorsement of the only section of the party that matters, has filed his nomination on friday, so his bid is now official. It's an important symbolic move to push the Congress into exercising choice, rather than accepting orders.

However, it is understood that accepting orders will be the remit of Mallikarjun Kharge, who is near certain to be elected. "A parallel power centre" of the Gandhis will call the shots, said sources, and will frustrate what Shashi Tharoor has aimed at: a transparency in operations that allows an array of voices. For the Congress, this is no step forward, many steps back.